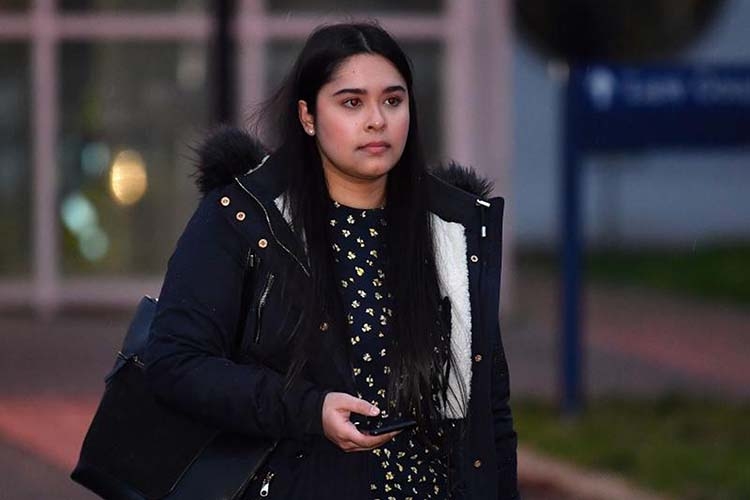 Sneha Chowdhury leaves after appearing at the first day of her trial at Woolwich Crown Court in south-east London, on Jan 6, 2020. -AFP
A British Uber driver, previously cleared of a sword attack on police outside Buckingham Palace, was convicted on Monday (Feb 10) of a plot to kill people in the name of Islam at London tourist destinations including Madame Tussauds and the Gay Pride parade.
Mohiussunnath Chowd-hury, 28, from Luton, north of London, boasted to undercover detectives about having deceived the jury after being acquitted of wounding police officers outside Queen Elizabeth's London home in 2017.
Chowdhury subsequently tried to obtain a gun, had information on his phone about how to attack people with knives, practiced stabbing and decapitation techniques, and discussed an attack using a van as a weapon.
Chowdhury was convicted at London's Woolwich Crown Court of preparing terrorist acts, possessing information useful to terrorism and disseminating a terrorist publication. He will be sentenced on March 13. "
It is very clear his intent was to kill and harm as many people as possible and he was prepared to die in doing so," said Richard Smith, head of the Metropolitan Police's Counter Terrorism Command. "And, in his view, he felt that would make him a kind of martyr to his cause."
Britain has suffered two Islamist attacks in recent months by people let out of prison early, which critics say has highlighted problems with its anti-terrorism strategy.

This month, a man released early from prison was shot dead by police after stabbing two people with a knife in a rampage on a busy south London street.
In November, another former convict, who had been convicted of being part of a group that plotted to bomb London's stock exchange, killed two people and wounded three more before police shot him dead near London Bridge.
In 2017, Chowdhury injured two unarmed police officers, who suffered cuts to their hands from his sword when they fought to disarm him near Buckingham Palace as he shouted "Allahu Akbar!" (God is greatest).
In his defense, Chowdhury said he had trying to commit suicide, not attack anyone. But he later told undercover officers that he had been trying to carry out an attack and that he had deceived the jury, in part by shaving off his beard.
Police began to investigate Chowdhury in December 2018, within days of his release from prison, when he began posting messages extolling the virtues of becoming a martyr for Islam.Chowdhury purchased a replica Glock gun and unwittingly told undercover officers about his plans to carry out an attack.
He spoke, for example, of the Madame Tussauds waxworks museum as a potential location because there were no traffic bollards there and also considered attacking an open-top tour bus.Chowdhury's sister was convicted of failing to disclose information about his plans to carry out an attack.
---Reuters, London