Why we snore (and how to solve it) 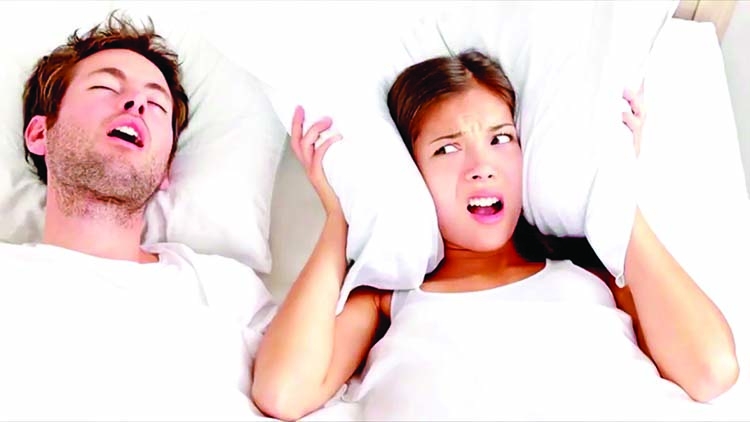 Snoring is not an illness, but it can be a symptom of something more problematic.  When you fall into a deep sleep, the muscles in your body relax, including the muscles in your mouth. Sometimes they relax so much that they can partially block the airway, causing vibrations - and that's snoring. In some cases, snoring is caused by your mouth anatomy - a low, thick palate or an unusually long uvula, for example.
Sometimes, it's due to nasal problems (like chronic congestion), sleep apnea or even alcohol. The narrower your airway gets, the more forceful the airflow becomes, causing vibrations in the tissues in your throat. The greater the vibrations, the louder the snore. Though snoring can happen in otherwise healthy people, there are several causes for snoring, ranging from the benign to the more serious.

Sleep apnea
Sleep apnea is the most serious underlying cause of snoring. People who have sleep apnea stop breathing over and over again while they're sleeping. It's characterized by episodes of especially loud snoring, followed by brief periods of silence when breathing momentarily stops. At that point, a person with sleep apnea will usually wake up gasping for air. Sleep apnea occurs in about half of adults who snore loudly, according to the National Sleep Foundation. With sleep apnea the muscles of the airway relax so much that they close for up to 10 seconds at a time, at least five times every hour.
Many times the problem is first detected by a bed partner. It's then usually diagnosed by a sleep study performed in a sleep clinic. When you undergo a sleep study, sensors are put on your neck and face to measure how often you stop breathing during sleep. Sleep studies can diagnose the problem accurately and indicate the need for treatment.
Treatment for sleep apnea usually involves the use of a CPAP (continuous positive air pressure) machine, which is worn while you sleep. It's a mask connected to a tube that blows air into your nose or your nose and mouth to keep your airway open during sleep. Sometimes, treatment can also include surgery to fix anatomical issues, such as tonsils or adenoids that are too large.
(This is most often used for kids, who often have enlarged tonsils and adenoids, though this doesn't always lead to sleep apnea.) In an overweight person, weight loss can ease the condition. It's imperative to treat sleep apnea because it causes more than just annoying snoring. It can also cause disturbed sleep and reduced oxygen flow, which can lead to depression, memory issues, strokes, osteoporosis and even heart disease and cancer.

Other snoring causes (and how to treat them)
There are several other, less severe, causes of snoring. They include: Nasal congestion. When you're stuffy and can't breathe through your nose - whether from a cold or allergies - you breathe through your mouth, and that can trigger snoring. An antihistamine or steroid spray can help with the congestion.  Deviated septum. Sometimes the wall that separates one nostril from the other can be crooked or off-center and can contribute to snoring.
About 80% of people may have issues with their septum. If you have significant problems - such as chronic sinus infections and breathing issues - your doctor may suggest medications or even surgery.  Alcohol. Alcohol works as a muscle relaxant, causing the airway muscles to relax more than they normally would. Drinking right before bedtime can lead to snoring. Sedatives can have a similar effect.
Aging. When I was a kid, I remember my grandmother dozing on the couch, snoring so loudly you could hear her in the kitchen, or even sometimes outside. As we age, our muscles tend to relax more, making snoring more common in older adults.

Lifestyle changes If your doctor has ruled out any serious medical issues, you may want to try some home remedies to prevent snoring. The Mayo Clinic suggests: Sleep on your side. When you lie on your back, your tongue falls into your throat, which partially obstructs your airflow. Some people have success sewing a tennis ball into the back of their pajama top to keep them from always rolling onto their back.
Raise the head of your bed. Raising it about 4 inches may help. Try nasal strips. Apply these adhesive strips to the bridge of your nose to open nasal passage and help breathing. Lose weight. Extra pounds can often be linked to snoring.
Being active throughout the day can help you keep a healthy weight, which might lead to less snoring. Quit smoking. In addition to so many other health benefits, when you quit smoking you can also ease snoring.  Get enough sleep. Adults should get at least seven hours of sleep per night.
When you're overly tired, you tend to sleep deeper which can trigger more snoring. As long as it's not caused by sleep apnea, snoring is not a worrisome problem (although your partner may adamantly disagree). If you're experiencing other symptoms, such as daytime drowsiness or morning headaches, be sure to see your doctor to get to the underlying issues.


Chanie Kirschner is part of MNN's advice team.
The article appeared in MNN