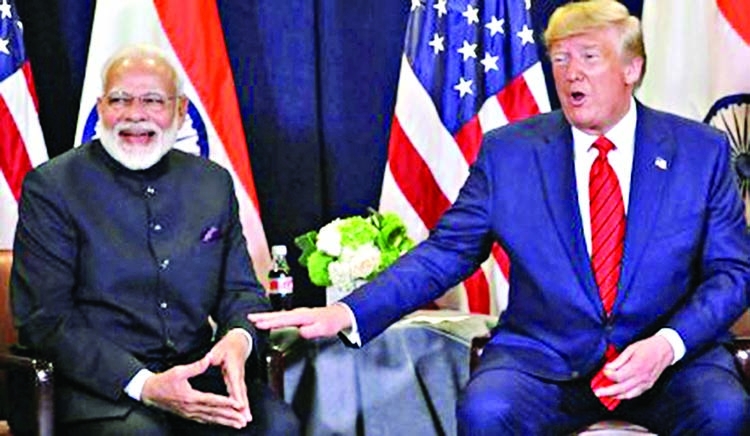 US President Donald Trump will embark on a two-day visit to India from February 24 during which he will travel to New Delhi and Ahmedabad to further strengthen the strategic bilateral partnership and highlight the strong and enduring bonds between the American and Indian people, the White House announced on Tuesday.
President Trump will be accompanied by First Lady Melania Trump and they will visit India on February 24-25, White House Press Secretary Stephanie Grisham said.
She said President Trump and Prime Minister Narendra Modi talked on the telephone over the weekend."During a phone call over the weekend, President Trump and Prime Minister Modi agreed the trip would further strengthen the India-US strategic partnership and highlight the strong and enduring bonds between the American and Indian people," she said.
The President and the First Lady will travel to New Delhi and Ahmedabad, which is in Prime Minister Modi's home State of Gujarat and played an important role in Mahatma Gandhi's life and leadership of the Indian independence movement, the White House said.Trump's predecessor Barack Obama had travelled to India in 2010 and 2015.
"President Trump's trip to India is timely in view of the bilateral trade issues that need to be resolved and in light of the collaborations between the US and India in various realms," M R Rangaswami, Indian-American philanthropist and head of Indiaspora, told PTI.
Describing it as a significant visit, Mukesh Aghi, president of the US-India Strategic and Partnership Forum, noted that the last three American presidents had made trips to India."It's essential to send a message to the region that India is a significant partner and the president values that," Aghi told PTI.
India has a role to play not only in its immediate neighborhood, but in making sure that the South China Sea and the Indo Pacific region is part of the international global order, he said.
Trump's visit follows Modi's tour of the US in September, during which he met with the US President in New York on the sidelines of the 74th session of the UN General Assembly.
The meeting had come just days after the two leaders attended the mega 'Howdy Modi' rally in Houston which was attended by more than 50,000 Indian-Americans.The two leaders also met in August at the G7 summit held in the French town of Biarritz.
Prime Minister Modi, while interacting with the media alongside President Trump, had rejected any scope for third party mediation between India and Pakistan on Kashmir, saying the two countries can discuss and resolve all issues bilaterally and "we don't want to trouble any third country."India trip will be Trump's second overseas this year, after a two-day visit to Switzerland for the World Economic Forum in Davos.