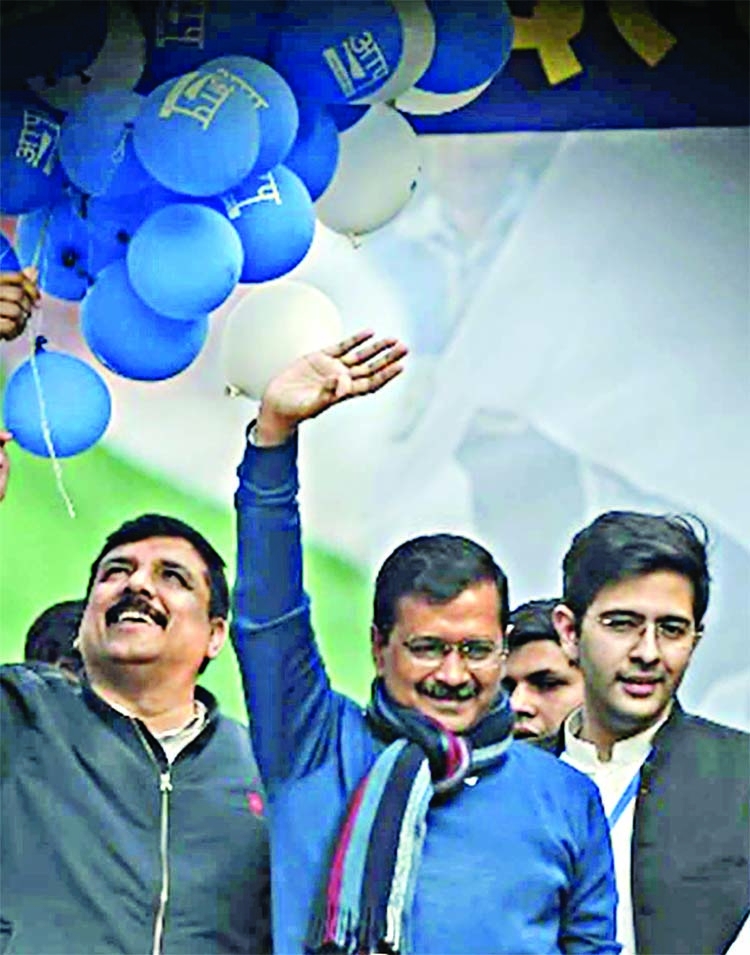 Delhi Chief Minister Arvind Kejriwal waving at supporters as his party wins the assembly polls. -NDTV
The ruling Aam Aadmi Party (AAP) scored a landslide victory in Delhi assembly elections for the second time in a row as it swept aside both BJP, which was again restricted to a single digit, and Congress which could not win a single seat.
AAP won 62 seats in the 70-member assembly, five seats short of its 2015 tally when it had won 67 seats. The BJP won eight seats, five more than its tally in the previous election. The Congress, which had failed to win a seat in the last election also, saw a dip in its vote percentage.AAP's victory came in the backdrop of a campaign marked by shrillness and dashed BJP's hopes to form government in the national capital after nearly two decades.
The victory, which has raised political stature of Kejriwal, saw BJP raking up Citizenship Amendment Act and the protest at Shaheen Bagh against the legislation which has been continuing for the past over 50 days.AAP, which had won 54.34 per cent votes in 2015, came close to its past performance and secured 53.57 per cent votes.
BJP also improved its vote percentage from 32.19 in the previous election to 38.51 per cent.Prime Minister Narendra Modi was among the leaders who congratulated Kejriwal."Congratulations to AAP and Arvind Kerjriwalji for the victory in the Delhi Assembly Elections. Wishing them the very best in fulfilling the aspirations of the people of Delhi," he said.
Kejriwal won his New Delhi seat by 21,697 votes against his BJP rival Sunil Kumar Yadav.He termed AAP's victory in Delhi as a win for the people who consider him as their son."I thank people of Delhi for reposing their faith in AAP for the third time. This is the victory of the people who consider me as their son and voted for us. This is the beginning of a new kind of politics. This is a new sign," Kejriwal said at the AAP office here.
The Chief Minister, who was accompanied by his wife Sunita Kejriwal, AAP Rajya Sabha MP Sanjay Singh and newly-elected MLA Raghav Chaddha, said, "I thank all the citizens of Delhi and all our party workers. Our party workers continued to work throughout day and night. My family also supported me through this electoral battle. Today is also the birthday of my wife."
He also the verdict came on Tuesday, which was a day dedicated to Lord Hanuman.Congratulations poured in for Kejriwal from political leaders across the country.
Among those who congratulated him were Maharashtra Chief Minister Uddhav Thackeray, West Bengal Chief Minister Mamata Banerjee, RJD leader Tejashwi Yadav and Andhra Pradesh Chief Minister YS Jagan Mohan Reddy.Delhi BJP chief Manoj Tiwari also congratulated Kejriwal and expressed gratitude towards the BJP party workers for their hard work in the run-up to the polls.
"I thank the people of Delhi. I thank our party workers for their hard work. They have done a lot. I accept the mandate of the people of Delhi and congratulate Arvind Kejriwal. I hope that he will perform well as per the expectations of the people."
He said the party will evaluate the outcome and the party cadres should not feel disheartened over the performance.
Congress leader P Chidambaram said the people of Delhi have defeated "the dangerous agenda of BJP".

"AAP won, bluff and bluster lost. The people of Delhi, who are from all parts of India, have defeated the polarizing, divisive and dangerous agenda of the BJP. I salute the people of Delhi who have set an example to other states that will hold their elections in 2021 and 2022," Chidambaram said in a tweet.
Celebrations began at the AAP office soon after it became clear that the party was headed for a big victory. Party workers were seen dancing to drum beats. Bigwigs of the party won the polls. Party leader Amanatullah Khan won from Okhla, the constituency which includes Shaheen Bagh, by over 71,000 votes.
AAP's Sanjeev Jha won from Burari with a margin of over 88,000 votes. The results surpassed predictions of some exit polls, though they had given an outright victory for AAP.
The counting of votes began amid tight security at 8 am today. Delhi had gone to polls on February 8.Unlike AAP, the BJP had not projected a chief ministerial candidate and sought votes to strengthen the hands of Prime Minister Narendra Modi.
While Modi held two rallies, Home Minister Amit Shah and BJP chief JP Nadda held several rallies in the city.AAP sought votes for the development work it had done in the city in the past five years.
AAP government's efforts to improve government schools apparently touched the lives of the poor people in the city. It also started populist schemes including free travel for women and exemptions in electricity and water bills on stipulated consumption.
Kejriwal, who used to target the Prime Minister, also changed the tack and changed the line of his political attacks.The city had witnessed violence during the anti-CAA stir with buses burnt. The police had also entered the Jamia campus. There were two incidents of firing in the run-up to elections even as anti-CAA protests continued.JNU students had also held protests over campus violence and hike in fees.
The results were disappointing for the Congress which ruled the city for 15 years before the advent of AAP. It was the worst performance of the party in Delhi assembly polls. The party had performed better than AAP in the Lok Sabha polls last year.Congress leaders Rahul Gandhi and Priyanka Gandhi Vadra had campaigned in Delhi polls.
---Agencies