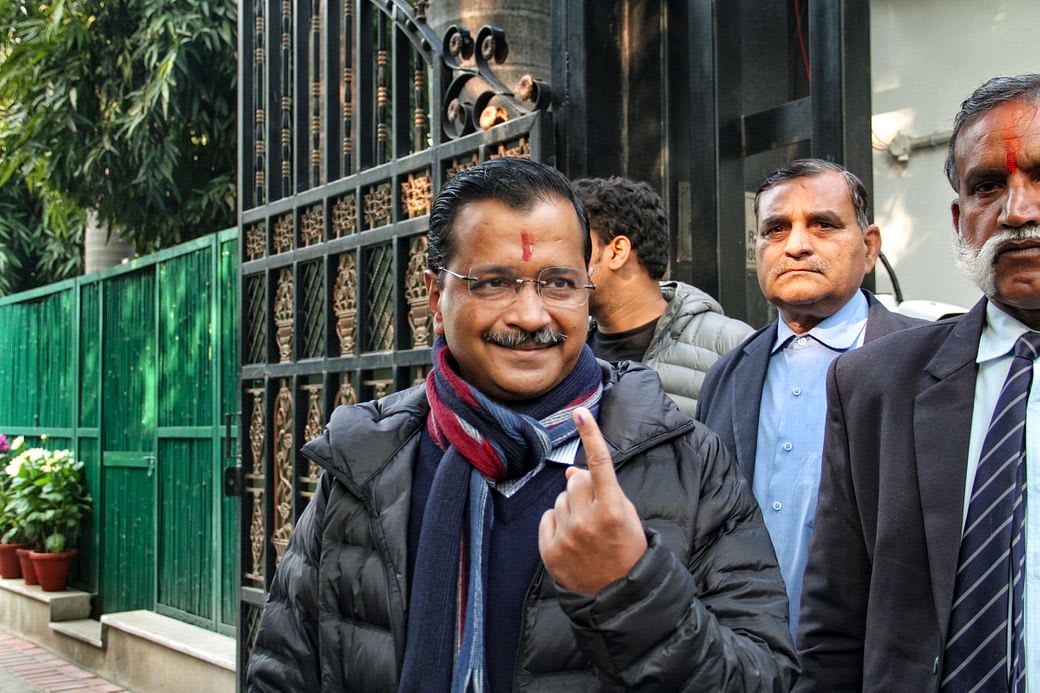 Delhi Chief Minister Arvind Kejriwal has secured another term in office after his party won a resounding victory in elections in the capital.
Voters overwhelmingly backed the Aam Aadmi Party (AAP) in an election which pitted them against India's governing Bharatiya Janata Party (BJP).
It's a setback for the BJP after last year's general election landslide.
The party won five more seats in Delhi but still holds just eight out of 70. The AAP won all the rest.
"This is a win for Mother India," a grinning Mr Kejriwal told his supporters at the AAP office earlier in the day. He waved and blew them kisses, and said he "loved the people of Delhi".
The 51-year-old former bureaucrat rose to political fame as an anti-corruption campaigner. He first became chief minister in 2013 and was then re-elected in 2015 with a landslide. He has been credited with turning around Delhi's government-run schools, establishing affordable neighbourhood clinics and providing cheap water and electricity.
He has also consistently campaigned for greater autonomy for the state, as control of its police force and land still rest with the federal government.
"It's not just my win. This is a win for every family whose children are now getting good education in school, whose family members are getting good treatment in hospitals," he said.
Mr Kejriwal led a victory parade from the AAP office to the Hanuman temple in the city centre, after saying his party's victory was a blessing from Hanuman, the monkey god.
Celebrations were held outside the AAP office where party workers told BBC Hindi the win vindicates their decision to campaign hard on "governance and development", and refrain from "divisive politics".
The BJP's campaign saw heavyweights such as Home Minister Amit Shah take to the Delhi streets to woo voters but that appears to have had little impact on the outcome.
The party relied on its Hindu nationalist rhetoric, criticising a peaceful gathering of thousands in Shaheen Bagh - a largely Muslim neighbourhood in Delhi - which has been protesting against India's controversial new citizenship law, known as the Citizenship Amendment Act (CAA).
Many Indians say the law discriminates against Muslims.
BJP leaders painted the protesters at Shaheen Bagh - largely comprising Muslim women - as dangerous traitors who wanted to break up the country. And they alleged that the AAP was supporting them, a tactic which did not chime with voters.
On Tuesday women, men and children held a silent protest at Shaheen Bagh, many wearing black gags around their mouths, reports the BBC's Rajini Vaidyanathan who was at the vigil.
The BJP has only marginally improved its tally from 2015, when it won only three seats as the AAP swept to victory.
The Congress party, which won no seats last time, failed to improve on its showing.
At last year's general election the BJP won all seven parliamentary constituencies in Delhi.