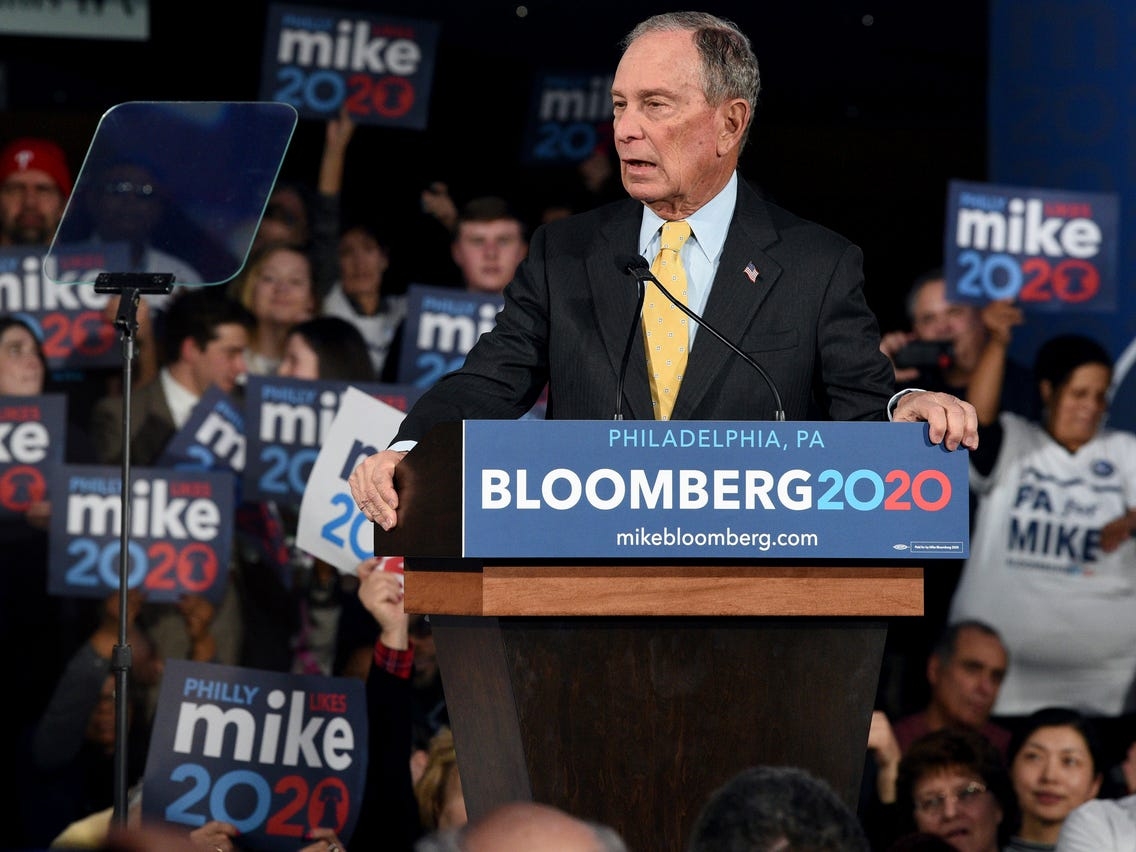 Democratic presidential hopeful Michael Bloomberg said police should focus on minority neighborhoods "because that's where all the crime is", according to audio from 2015 that has resurfaced.
The former New York City mayor also told a think-tank that male minorities perpetrate "the real crime".
The billionaire last year apologized for backing stop-and frisk policing as he launched his White House campaign.
A new poll places Mr Bloomberg at third place in the crowded Democratic field.
Stop-and-frisk is a practice where the police stop, question and search people on the street to try and find weapons and other illegal items.
What does the audio reveal?
In remarks to the Aspen Institute in Colorado on 5 February 2015, Mr Bloomberg is heard saying: "It's controversial, but first thing is, all of your - 95% percent of your murders, murderers and murder victims, fit one M.O. [method of operation]
"You can just take the description, Xerox it and pass out to all the cops. They are male minorities, 15 to 25. That's true in New York.
"It's true in virtually every city. And that's where the real crime is. You've got to get the guns out of the hands of the people that are getting killed."
He added: "Put those cops where the crime is, which is in the minority neighborhoods. So this is - one of the unintended consequences is, people say, 'Oh my God, you are arresting kids for marijuana that are all minorities.' Yes, that's true. Why?
"Because we put all the cops in the minority neighborhoods. Yes, that's true. Why do we do it? Because that's where all the crime is."
He continued: "And the way you get the guns out of the kids' hands is to throw them against the wall and frisk them."
According to the Aspen Times newspaper, Mr Bloomberg's aides had asked journalists not to air footage of his remarks.
What's the reaction?
US President Donald Trump, who reportedly views Mr Bloomberg as a serious threat to his prospects of re-election in November despite deriding him as "Mini Mike", tweeted the audio clip on Tuesday.
Mr Trump commented: "WOW, BLOOMBERG IS A TOTAL RACIST!"
Critics pointed out that the Republican president has himself been a vocal supporter of stop-and-frisk policing and has previously been accused of racism.
The audio clip of Mr Bloomberg's comments was posted on Twitter on Monday by Benjamin Dixon, a progressive podcaster.
He highlighted it with the hashtag #BloombergIsARacist.
In a tweet, Mr Dixon called on all who have supported Mr Bloomberg's candidacy to retract their endorsements.
What does Bloomberg say now about 'stop and frisk'?
In a statement on Tuesday, Mr Bloomberg said stop and frisk was a policy he inherited and he cut it back by 95% by the time he left office, but he should have done that faster and sooner.
"I regret that and I have apologised - and I have taken responsibility for taking too long to understand the impact it had on black and Latino communities."
He then turned his fire on the president, who "inherited a country marching towards greater equality and divided us with racist appeals and hateful rhetoric".
"President Trump's deleted tweet is the latest example of his endless efforts to divide Americans," he added.
How is the Bloomberg campaign doing?
Mr Bloomberg, who built his $62bn (£48bn) fortune on data terminals widely used in the financial industry, has so far ploughed a mammoth $300m into his 2020 Democratic campaign for the White House.
A national poll from Quinnipiac University released on Monday showed the tycoon vaulting into third place out of the 11 remaining candidates.
According to the survey, Bernie Sanders was in first place on 25%, Joe Biden fell to second place on 17%, and Mr Bloomberg was snapping at his heels on 15%.
Mr Bloomberg has adopted an unusual strategy of bypassing Iowa and New Hampshire, the first of the states voting nationwide to determine the Democratic White House nominee who will be crowned at the party convention in July.
Pundits were sceptical of his plan, though his steady rise in the polls has appeared to prove them wrong.
However, it remains to be seen how the billionaire will fare with looming contests in states where minority votes are key.