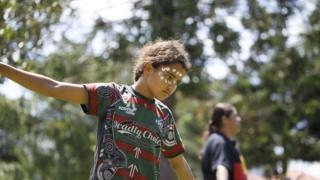 Australia has made progress in improving education for indigenous people, but is still falling short in many areas, an annual report has found.
Life expectancy, employment and literacy rates all remain lower for indigenous Australians, according to the Closing The Gap report.
Prime Minister Scott Morrison told parliament on Tuesday: "The results are not good enough."
He called the disadvantages suffered by indigenous children a "national shame".
The previous "top-down, government-knows best approach" had failed because it had "never really been a partnership with Indigenous people", he said.
Literacy and life-expectancy
The report tracks targets set in 2008 aimed at reducing inequality.
Last year, three of seven key areas were met last year. . Only two are rated as "on track" this year, in early childhood education and in the final year of schooling.
The goal of 95% of all indigenous four year olds being enrolled in early education by 2025 is close to being reached.
But targets are falling short in child mortality, school attendance, literacy and numeracy, employment and life expectancy.
Indigenous men die on average eight years younger than non-indigenous men, the report states. Youth suicide rates are also four times higher than in non-indigenous communities.
Aboriginal Australians and Torres Strait Islanders, who together comprise 3% of Australia's population, continue to experience high levels of disadvantage.
"We all have in our own way sought to grapple with the consequences of 2.25 centuries of Indigenous disempowerment," Mr Morrison said.
'Shared responsibility'
Speaking in parliament on Wednesday, Mr Morrison said progress had been made in the past 12 years in some areas - for example 20% more Indigenous people now finish high school.
However, more indigenous autonomy was needed to achieve improvements in the other areas, he said.
He said the government had "perpetuated an ingrained way of thinking passed down over two centuries and more, and it was the belief that we knew better than our Indigenous peoples. We don't."
"We must see the gap we wish to close, not from our viewpoints, but from the viewpoint of Indigenous Australians."
His comments were echoed by Indigenous Affairs Minister Ken Wyatt, the first ever Aboriginal person to hold the position.
"Indigenous Australians are the key agents of change," he wrote in the The Age and The Sydney Morning Herald newspapers on Wednesday.
"Governments need to draw on their insights, knowledge and lived experiences to deliver on Closing the Gap, for current and future generations."
The focus in the future would be on education, he said and "a new way of working together to achieve our shared goal - working with experts, families, frontline service providers and communities".