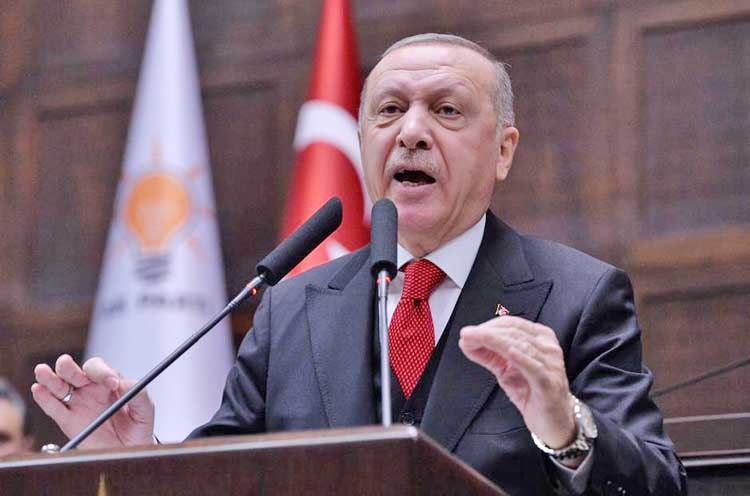 President Tayyip Erdogan said on Wednesday that Turkey's military would strike Russian-backed Syrian forces by air or ground anywhere in Syria if another Turkish soldier was hurt as the Assad government tried to regain control of Idlib province.
Erdogan said Turkey is determined to push Syrian government forces beyond Turkish observation posts in Idlib by the end this month, and he urged allied Syrian rebels not to give government forces an excuse to attack.
Violence has flared in Idlib, in northwest Syria and bordering Turkey, in recent weeks as government forces backed by Russia and Iran have made gains in their campaign to eliminate the last insurgent bastion in Syria's nine-year-old war.
Turkey, which is allied with some rebel groups opposed to Syrian President Bashar al-Assad, mounted a counter-attack on Tuesday after 13 Turkish soldiers were killed by Syrian shelling in Idlib in the last 10 days.
"If there is the smallest injury to our soldiers on the observation posts or other places, I am declaring from here that we will hit the regime forces everywhere from today, regardless of Idlib's borders or the lines of the Sochi agreement," Erdogan said, referring to a 2018 ceasefire accord.
"We will do this by any means necessary, by air or ground, without hesitating, without allowing for any stalling," he told members of his AK Party in Ankara. Russia, which has an air base in Syria, has controlled Idlib's air space for several years.
Turkey has set up 12 observation posts in Idlib as part of an agreement with Russia and Iran to establish what is termed a de-escalation zone. This month it has poured some 5,000 troops and convoys of military vehicles across the border into Idlib, including tanks, armored personnel carriers and radar equipment to bolster its existing military positions.
The Turkish military casualties have sparked some of the most serious confrontations between Ankara and Damascus in the war, which has killed hundreds of thousands of people and made millions refugees, including 3.7 million Syrians in Turkey.
The fighting - which has driven nearly 700,000 people from their homes in the last 10 weeks - has also strained ties between Moscow and Ankara, which says it cannot handle another wave of refugees.
TASS news agency quoted the Kremlin as saying that Russian President Vladimir Putin and Erdogan agreed in a phone call the sides would continue contacts on Syria. Erdogan said he discussed with Putin the "damage the (Syrian) regime and even Russia inflicted" on Turkish soldiers there.
Erdogan said Russian and Syrian government attacks have targeted not terrorists but civilians. "Russian forces and Iran backed militias are constantly attacking the civilian people, carrying out massacres, spilling blood," he said.
---Reuters, Ankara