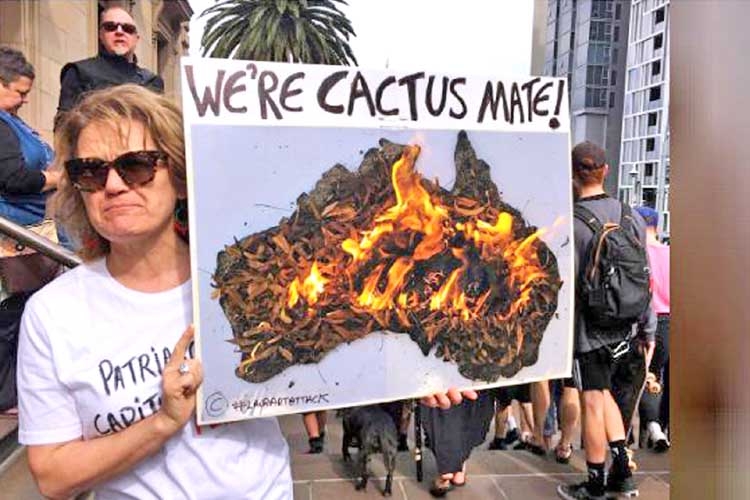 A woman holds up a sign as she takes part in a protest to call for action on climate change in Melbourne, Australia, September 20, 2019. -Reuters
Australia's deadly wildfires have opened up a small window of opportunity for the country to break a decade-long impasse on climate policy, as some politicians and big business push for major change.
Independent politician Zali Steggall this week unveiled proposed legislation to target zero carbon emissions by 2050, aiming to take advantage of a subtle shift in rhetoric from the conservative Liberal-led coalition government.
"Eighty percent of the public wants to see us addressing climate change. The impacts are real. We are experiencing them now," Steggall, who plans to introduce the bill into parliament next month, told Reuters.
Steggall and other crossbench politicians are pushing for all lawmakers to be allowed a conscience vote on the bill. That would enable members of the Liberal Party and main opposition Labor Party who oppose building new coal-fired plants and have constituents pressing for more climate action to unite to pass the legislation.
But it will be an uphill battle as Prime Minister Scott Morrison faces fresh calls by some in his conservative government to fund new coal-fired power stations, a policy popular with some voters because it stabilizes jobs, boosts power supplies and keeps a lid on energy prices. Without substantial support from Labor and moderates in the Liberal-led coalition government, the bill is unlikely to pass.
The issue of climate change has plagued leaders of Australia for the past decade, contributing to the downfall of at least three prime ministers. As the world's biggest exporter of coal and liquefied natural gas and one of the world's biggest carbon emitters per person, Australia has also come under fire from global climate activists and the United Nations for not taking more responsibility to curb global warming.
Morrison acknowledged last week climate change was a factor in what he has dubbed Australia's "Black Summer", in which bushfires have killed 33 people, charred nearly 12 million hectares (29.7 million acres) of land and wreaked billions of dollars in damage.
That was a slight shift from remarks made as recently as January, when he largely blamed a lack of preemptive burn-off to clear hazardous vegetation and a three-year drought for the devastating bushfires. "What it shows is there's a recognition that climate change is problematic for Australia and we need to take more action to protect ourselves against the consequences," said Mark Howden, director of the Climate Change Institute at Australian National University.
The Business Council of Australia (BCA) is backing Steggall's proposed legislation, which includes a call for five-year plans to meet specific emissions budgets, to create certainty for investors.
---Reuters, Melbourne