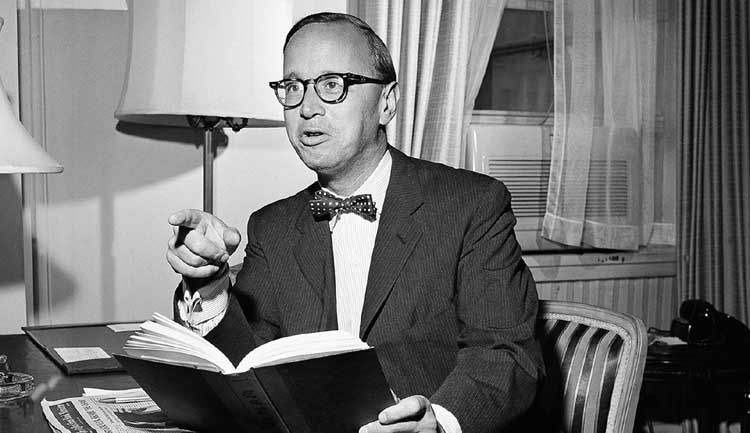 There are times when you remember the 1960s, the men who made a difference in the 1960s. Arthur Schlesinger, Jr. was one of these men who convinced us that idealism matterd. He served as one of the intellectual underpinnings of the Kennedy administration in the early part of the 1960s.
It was a time when the best and the brightest came to define a government that many thought was Camelot. Its underpinning was liberalism, with Schlesinger serving as its personification. In the years after John F. Kennedy's assassination, Schlesinger moved out of the corridors of power.
The era of Lyndon Johnson was a time where there was hardly any place for him, though a good number of Kennedy men, such as Dean Rusk and Robert McNamara, hung on and would stay on till nearly the end of the LBJ administration. The best and the brightest, or at least many of them, would end up being part of a bad experiment. The experiment was Vietnam.
Fortunately for him, Schlesinger watched the fire leap from hill to mountain, without being part of it. He spotted the holes JFK's successor was digging for himself and only shook his head in dismay. It did not much matter that Johnson was, like all those others who had stormed to power at the November 1960 election, a liberal. He had, after all, promoted the Great Society. And he was the president who signed the Civil Rights bill and gave men like Martin Luther King, Jr., reasons to think better days were ahead for America's blacks.
These, however, were achievements that were lost in the lengthening shadows cast by the gathering crisis over Vietnam. The escalation of the war unhinged the Johnson administration, to a point where politicians like Eugene McCarthy and Robert Kennedy publicly challenged the president for the Democratic nomination for the 1968 presidential election. It was McCarthy's strong showing at the New Hampshire primary in February 1968, when he obtained 44 per cent of support to Johnson's 48 per cent, that convinced LBJ he had to abdicate. He did, soon enough.
The social and political ferment convinced Schlesinger that America needed change, which is why he looked to Robert Kennedy, brother of the assassinated president, to restore Camelot in Washington. RFK, as he was known, was for McCarthy supporters a carpetbagger who had plunged into the election only after McCarthy had shown that President Johnson was vulnerable. But for Schlesinger and the so-called Irish mafia which ruled America for the thousand days of the JFK administration, Senator Robert Kennedy offered new hope of a restoration.
Already there were the loud whispers of a second Kennedy administration in the White House. Men like Kenny O'Donnell and Pierre Salinger waited expectantly for a January 1969 revival. Schlesinger would once more be the oracular spirit of liberalism. But that was not to be. On a summer's day in early June 1968, Robert Kennedy was shot dead in the pantry of a Los Angeles hotel moments after his triumph in the California primary.
The dream of a Kennedy restoration was set at naught. The liberals, who had been gathering around what they had thought was a new wigwam, slowly, sadly dispersed. Some went to McCarthy; and quite a few went over to George McGovern. In the end, the Democrats chose a hapless old-time liberal, Vice President Hubert Humphrey, for the presidential nomination. He went on to lose to Richard Nixon in November.
The return of Nixon to politics marked the beginning of the decline of liberalism in America. Arthur Schlesinger went into intellectual exile, perhaps nursing a secret hope that someday the old traditions would reassert themselves. There was yet the young Edward Kennedy to bank on. In January 1969, a few days before Nixon's inauguration as president, the youngest of the Kennedy brothers was elected whip of the Democratic majority in the Senate when he beat a veteran holder of the position.
Schlesinger and his fellow liberals foresaw a new Kennedy run for the White House in November 1972, when the first Nixon term would draw to an end. In the event, Edward Kennedy destroyed his own chances when in the summer of 1969 he drove his car, with a young woman named Mary Jo Kopechne in it, into the river. Kennedy struggled out of the car and stumbled back home. Under the water, Kopechne died. It was criminality on Kennedy's part. And he lost his hold on the future. He was never to be president, even though he made a noisy, feeble attempt to dislodge Jimmy Carter in 1980.
Schlesinger watched from the stands, much as John Kenneth Galbraith did, as rampant conservatism cast its darkening shadows over America. Schlesinger watched, with increasing concern, the accumulation of power in the White House. The enemies' list prepared by President Nixon, the scandal called Watergate, the expansion of the Vietnam war into Cambodia --- all these convinced the old-fashioned liberal intellectual that an imperial presidency was at work.
And it could only end in disaster. It did, for Nixon, for his country. But conservatism went from strength to bigger strength. The well-meaning but weak Carter was turfed out by Ronald Reagan in 1980. In 1988, George Bush Senior stopped the liberal Michael Dukakis from gaining the White House.
In the 1990s, as Hillary Clinton would famously suggest, a vast right-wing conspiracy had become intent on destroying her husband's presidency. And then came the neo-conservatives, personified by the likes of George Bush Junior, Dick Cheney, Donald Rumsfeld and John Bolton.
Arthur Schlesinger, Jr., could not have been a happy man when he died some years ago. It is never a cheering sight when rainbow dreams are lost in a flood of insistent darkness.