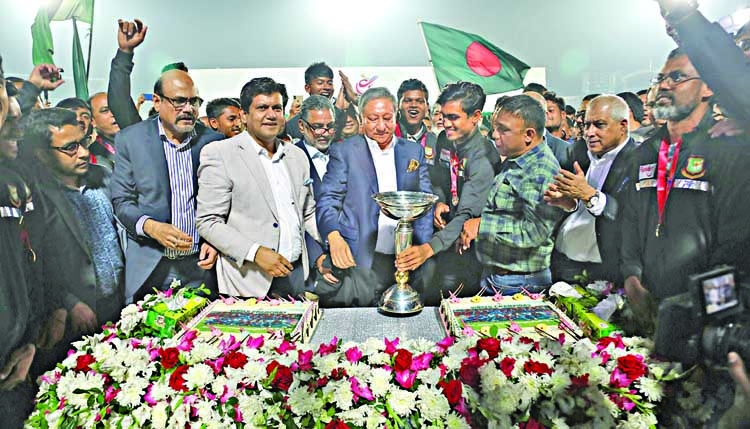 Bangladesh's Under-19 stars received a rousing welcome. -BCB
With the euphoria of the brand new champion Bangladesh U-19 cricket team's recent success saga in the recently concluded World Cup still raining in the wind, Akbar Ali's men returned home from South Africa on Wednesday afternoon amid a rousing reception by Bangladesh Cricket Board (BCB) and crazy cricket fans.
The Tigers' contingent reached at Hazrat Shah Jalal International Airport at 4:55 pm on an Emirates flight where State Minister for Youth and Sports Zahid Ahsan Russell and Bangladesh Cricket Board (BCB) President Nazmul Hassan welcomed the team at airport with flowers and sweets. The Young Tigers got the Water Cannon Salute when they reached home.
Hundreds and thousands of fans thronged Hazrat Shahjalal International Airport premises to welcome their heroic players. Later they were escorted to the Home of Cricket, Sher-e-Bangla National Cricket Stadium, where the new U-19 World champions enjoyed their victory celebration by cutting cake amid festivity.
Hundreds of crazy Cricket fans carrying national flags, and colourful banners and festoons were chanting slogans after the arrival of the junior Tigers at the Home of Cricket. The fans received the national heroes chanting slogan "Shabash Bangladesh, Shabash tigers" (Bravo Bangladesh, Bravo Tigers) in Mirpur.
The Sher-e-Bangla National Cricket Stadium was light up with spactaculer firework show in the evening in front of the huge cricket fans who witnessed the gala celebration from the gallery. Following the official press conference and lavish dinner party hosted by BCB, most of the players stayed at the National Academy and they went back to their homes today.
Cricket-mad Bangladesh erupted in joyous celebration on Sunday night after the Junior Tigers brought arch-rival and highflying India down to earth to script history in the grand finale of the ICC under 19 World Cup, with fans, politicians and BCB boss hailing the dramatic victory as the country's biggest sporting triumph. Impromptu victory processions broke out across the country, with some of the loudest celebrations taking place at Dhaka University where around 5,000 people had been watching the match on a big screen.
The crowds, including hundreds of girls, started dancing and chanting "Bangladesh, Bangladesh" as skipper Akbar Ali led from the front and hold his nerve to guide the junior Tigers to an exciting three-wicket victory, Bangladesh's first ever title in an ICC event.
Meanwhile, the government has decided to accord a grand reception to junior Tigers at Suhrawardy Udyan for clinching the ICC U-19 World Cup trophy, Road Transport and Bridges Minister Obaidul Quader said.