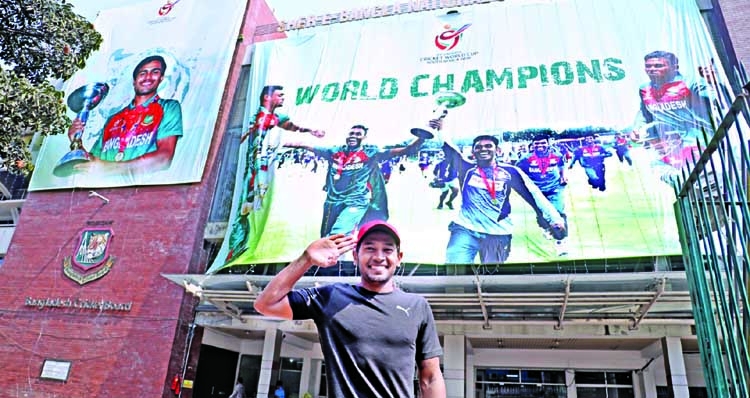 Mushfiqur Rahim strikes a happy pose in front of a poster of the world champions.
Bangladesh Mr. dependable Mushfiqur Rahim on Wednesday saluted the banners hung with the images of victorious Under-19 cricket team at Sher-e-Bangla National Cricket Stadium in Mirpur.
Mushfiq is passing busy time in preparing for the next round of Bangladesh Cricket League (BCL) and the forthcoming home series against Zimbabwe.
He posed for an image saluting Akbar Ali and his team for the World Cup glory and called the official photographer of BCB to snap it. Right after taking the photo, Mushfiqur did not waste a moment to post it on social media pages. Not just Mushfqiur, but also the entire country is celebrating the winning of the World Cup.
The young Tigers landed at Hazrat Shahjalal International Airport at 4:52pm on Wednesday. State Minister for Youth and Sports Zahid Ahsan Russell and BCB president Nazmul Hassan welcomed the team at airport.
As per the latest plan, after coming to BCB and attending a press conference, most of the players will stay at the National Academy tonight. They will travel to their respective villages on Thursday morning.
It was Bangladesh's first-ever world cup title in any level of cricket. Bangladesh never advanced to the final of any world cup before. Akbar and his team conquered the world in the first chance they have got and created history for the country.