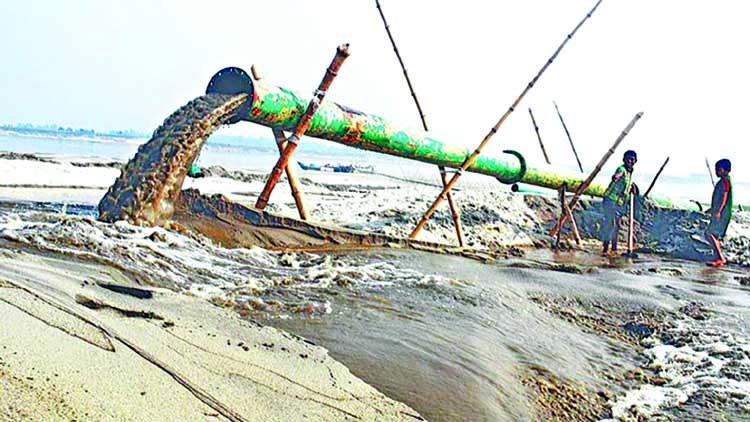 Illegal sand lifting causing river erosion and forcing the river side people to leave their home. -AA
Mindless sand lifting from the Tangkabati River in Amirabad area of Chattogram's Lohagara upazila has affected serious erosion in large areas, forcing 32 families to leave their ancestral home during the last couple of years.
Vast farmlands, a few roads, a temple and an old bazaar has already gone into the riverbed and hundreds of families are under threat due to the erosion. The families who have already left the area belong to the Hindu community living for generations in Banik Para, Brammon Para, and Shil Para of the upazila.
"How painful it is for a family to leave their own home? On several occasions, we protested against sand lifting from the Tangkabati river near our neighbourhood but no one helped us as the sand lifters are influential," said Paromesh Dhar, 38, who took shelter with his family at a relative's house in Chattogram's Boalkhali upazila around two and a half years ago.
Sumon Dhar, whose family took shelter at a relative's house at Dharmapur in Dohazari upazila around one and a half years ago, echoed the same. During a visit to the area a couple of days ago, this correspondent saw that a large number of villagers are facing threat due to the erosion. Tapon Chakrabarty, 55, priest of a local Bishnu Temple, said the illegal sand lifting has virtually destroyed the ancient temple.
Local people alleged that ruling party men Md Rafiqul Islam Chowdhury and Md Yousuf, among others, are involved in the illegal sand lifting business for long. The sand lifters gave death threat to those who protested, they said. Contacted, Md Rafiqul Islam Chowdhury, who introduced himself as general secretary of Krishok League's Lohagara unit, said he is lifting sand legally.
"I took permission from the local administration and if you have any query in this regard you can contact with them," he said. Md Yousuf, who claimed to be a ruling party man, said, "I am working for Rafiqul. No one is affected here due to sand lifting."