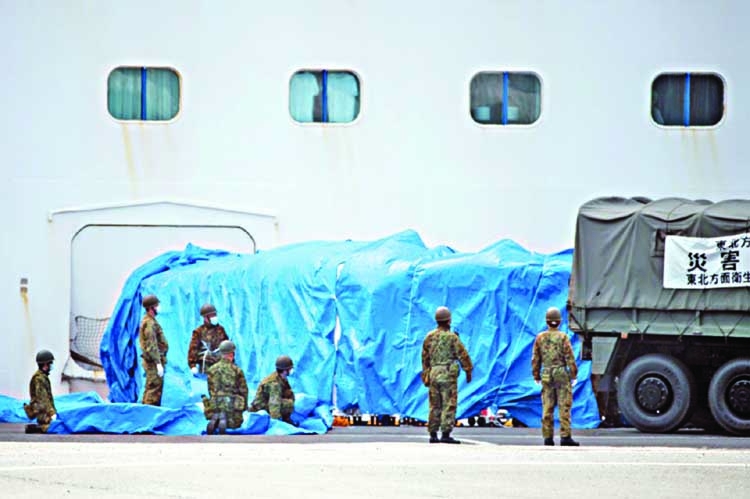 Members of Japan Self-Defense Force back a military vehicle to a gate of the Diamond Princess cruise ship. -AFP
Another 39 people aboard the Diamond Princess cruise ship in Japan have tested positive for the new coronavirus, authorities said Wednesday, as thousands more steel themselves for a second week in quarantine. With 174 confirmed cases, the ship that arrived with over 3,700 passengers and crew has become the largest single cluster of the newly named COVID-19 virus outside its origin in China, where it has killed more than 1,100.
Passengers and crew are now halfway through a 14-day quarantine that is due to end on February 19 and have been mostly confined to their quarters, aside from being allowed brief periods on deck while wearing face masks.
"You sit out on the balcony and you hear people coughing all the way along," British passenger Sally Abel said in a video streamed on Facebook. "It is nothing like a holiday, but it is complete relaxation," she added. Fellow passenger Yardley Wong tweeted: "Anxiety uprisen" on news of the new cases, saying she didn't know whether she or her family might be next.
On board the ship, the captain told passengers the situation was changing all the time. "We are following the latest and best public health guidelines from the authorities," he said in a broadcast that passengers relayed on social media.
He apologized for the "periodic service disruptions" to the internet, adding: "Diamond Princess has more bandwidth than any ship in the world, and at the same time, more mobile devices than ever before connected on a ship." Passengers have been active on social media throughout their quarantine and have been trying to stave off boredom and anxiety with on-demand movies, quizzes and games of Sudoku.
--AFP, Tokyo