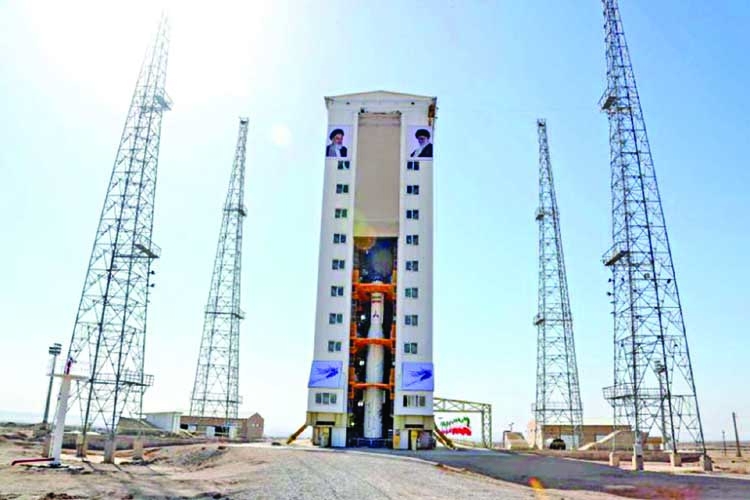 A handout picture made available by Iran's Ministry of Defense shows the Zafar statellie at the Imam Khomeini Spaceport in Iran on Sunday. -EPA
Iran's government on Wednesday rejected the United States' allegations that the Islamic republic's satellite program has a military dimension, days after the failed launch of its latest satellite. "The subject of satellite launch vehicles and satellites is a civilian matter," Defence Minister Amir Hatami was quoted as saying by state news agency IRNA.
"We could use a satellite for defence purposes, but the satellite launcher is a completely non-defensive subject and it's the definite and absolute right of the Iranian nation. "There is no prohibition in the world" against this satellite program, he said. Iran attempted on Sunday to launch a satellite dubbed the Zafar - Farsi for "Victory" - but it failed to reach orbit. Washington on Tuesday accused Tehran of using satellites as a cover to develop its missile program. US Secretary of State Mike Pompeo said the technology involved to launch satellites was "virtually identical" to the know-how for long-range ballistic missiles.
But Mr Hatami said Iran was only doing the same as "all other countries" with satellite programs. Iran would press ahead with its satellite program and planned to launch a new version of the Zafar by early next year, he added. "The Zafar 2, given its weight, will be launched with the Simorgh launcher," Mr Hatami said, referring to the rocket used in Sunday's launch. "We will still do research on the launcher and the satellites and will certainly continue this research until we are stable in this domain and until we are able to do it sustainably."
An official from the Governor's Office of Zahedan said that parts of the satellite had crashed near the city, the capital of Sistan and Baluchestan Province, according to Radio Farda. The province's Security and Law Enforcement deputy governor Mohammad-Hadi Marashi told the Islamic Republic News Agency (IRNA) that authorities were investigating the source of explosions and lights reported by locals on Sunday, adding that parts of the satellite had been found "in unpopulated areas close to Zahedan and citizens had no cause to worry."
Iran's Information and Communications Technology minister, Azari Jahromi, claimed that the Zafar had landed in the Indian Ocean on Sunday and promised to launch another version of the satellite into orbit in May or June.
Jahromi responded to the failed launch by pointing to the US space program's past failed launches and calling Iran "unstoppable." "Today 'Zafar' satellite launch failed. Like many scientific projects, Failure happened. FALCON 9, Juno II, ATLAS, PROTON M, ANTARES are just few samples of US launch failures. But We're UNSTOPPABLE! We have more Upcoming Great Iranian Satellites," tweeted Jahromi on Sunday.
The spokesperson for the space sector of the Iranian Defense Ministry, Ahmad Hosseini, said that the launch was a research launch and that the main objectives for research in the launch were accomplished, according to the Iranian Tasnim News Agency. "As announced before, it was a research launch, and our expectations were satisfied in the respective sectors," said Hosseini.
"We consider the launch as a successful one, because the research launch is not aimed at the injection phase." The spokesperson added that the satellite succeeded in connecting to bases on Earth for a few minutes, transmitted signals; its performance was tested. "The data analysis and modifications will be carried out at the shortest time possible, and the next launch will be performed soon," said Hosseini.
---AFP, Tehran