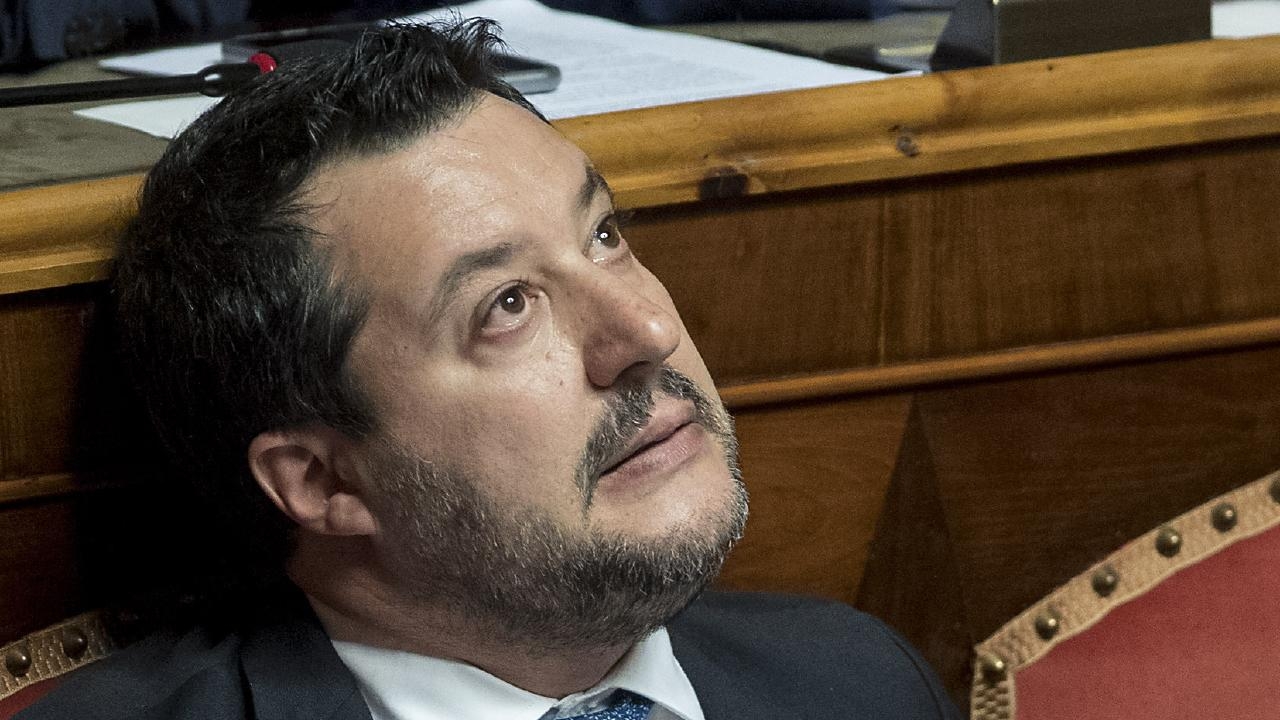 Italy's Senate has voted to allow prosecutors to put far-right leader Matteo Salvini on trial over charges of holding migrants at sea.
Mr Salvini, who previously served as Italy's interior minister, is accused of illegally keeping people on a boat off Sicily for days in August 2019.
Some 116 migrants remained aboard the Gregoretti for close to a week.
On Wednesday, a majority of senators voted for the trial of the anti-immigration League leader to go ahead.
Mr Salvini has repeatedly said he wants to go to court. He told the chamber he wanted "to tell the world" that his migration policies "saved tens of thousands of lives."
"I am absolutely calm and proud of what I have done. And I'll do it again as soon as I get back into government," he said later.
Senators from his League party left the chamber rather than take part in Wednesday's vote.
Under Italian law, ministers have parliamentary immunity for actions taken while they were in office. But a committee voted last month to strip Mr Salvini of his immunity - leaving the final decision in the hands of the Senate on Wednesday.
The upper house Senate voted 152-76 in favour of lifting the immunity.
After the tally was announced, Mr Salvini compared himself to US President Donald Trump, who was impeached in December and accused opponents of undermining his electoral success through the courts.
"I, like Trump? He has a few more billions and a few more years, but it's a bad little habit of the left, going around in the world, to try to win by judicial means," he wrote on Twitter.
If successfully prosecuted at trial, Mr Salvini could face up to 15 years in jail.
What is Mr Salvini accused of?
For years, some in Italy have complained that the country has taken in a large number of migrants fleeing across the Mediterranean, and has called for other EU nations to take their share.
Mr Salvini in particular took a hard stance on migrant boats while he was in office, implementing a closed ports policy.
On 25 July 2019, Italian coastguard ship the Gregoretti picked up about 140 migrants trying to travel to Italy from Libya.
While the Gregoretti allowed several people off the ship for medical attention, some 116 people remained on board for days while Mr Salvini demanded other EU countries take them in.
The decision drew an immediate backlash. Prosecutors opened an investigation into conditions aboard after reports that migrants only had one toilet between them.
After the Catholic Church and a number of states agreed to care for those on board, in a deal which then EU commissioner Dimitris Avramopoulos helped to broker, Mr Salvini eventually consented to let them dock on 31 July.
The League leader insists the decision to keep the migrants offshore had the support of Prime Minister Giuseppe Conte and the rest of the government.
But prosecutors believe he acted alone, ignoring repeated requests from Mr Conte to release them.
Italy's Populist Five Star Movement - at the time in coalition with the League - had backed Mr Salvini in previous cases, such as when 140 migrants on board the Diciotti vessel were not allowed to embark in Sicily for six days in the summer of 2018.
But the party says that in the case of the Gregoretti he acted alone.
Later in February Mr Salvini also faces losing his immunity over another migrant case. He is accused of keeping the Open Arms migrant vessel offshore for days in August last year.
At the time, Prime Minister Conte called Mr Salvini "obsessed" with keeping migrants out of Italy.