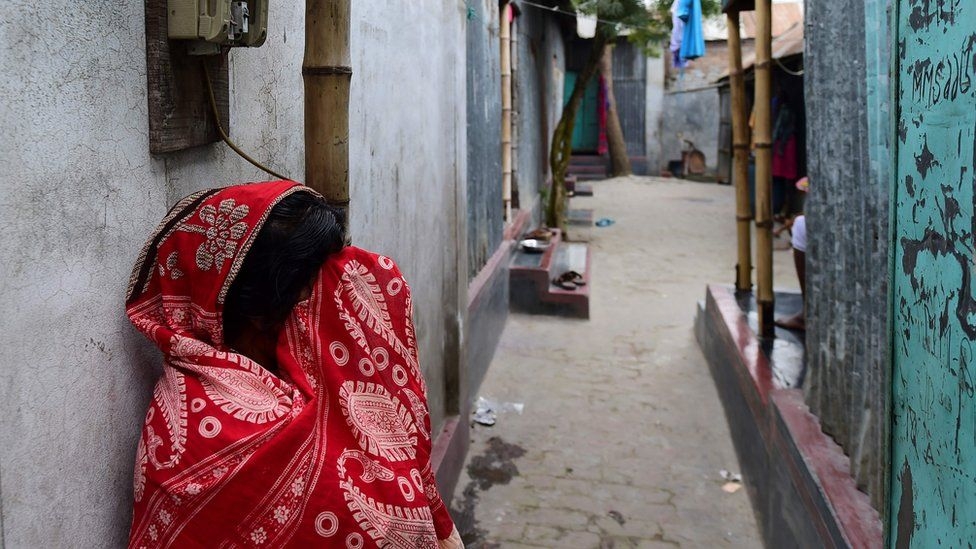 Activists in Bangladesh have welcomed the first ever Islamic funeral for a sex worker, breaking a long-standing taboo in the Muslim majority nation.
Hamida Begum, who worked at one of the world's largest brothels in the village of Daulatdia, died of illness last week at the age of 65.
A number of people gathered at her grave to witness the historic moment.
Sex work is legal in Bangladesh, but Islamic leaders have previously refused to perform funeral prayers for workers.
Instead, sex workers who die are usually buried in unmarked graves, without formal prayers, or dumped in rivers.
This was the fate that originally awaited Begum until a coalition of sex workers persuaded local police to talk to spiritual leaders - who have historically considered sex work "immoral" - about giving her a formal burial.
"The imam was initially reluctant to lead the prayers," local police chief Ashiqur Rahman, who oversaw the negotiations, told AFP news agency. "But we asked him whether Islam forbids anyone from taking part in the Janaza [funeral prayers] of a sex worker. He had no answer."
As a result, a religious funeral was held for her last Thursday.
Mr Rahman said the ceremony was attended by more than 200 people, while more than 400 went to the post-funeral meal and prayers.
"It was an unprecedented scene," Mr Rahman added. "People waited until late in the night to join the prayers. The eyes of sex workers welled up with tears."
Among those at Begum's graveside were her son, Mukul Seikh, and her 35-year-old daughter Laxmi, who is also a sex worker in the brothel in Daulatdia.
"I never dreamed that she would get such an honorable farewell. My mother was treated like a human being," Laxmi said.
"I hope from now on every woman who works here, including me, gets a Janaza just the way my mother did."
Jhumur Begum, the leader of the local coalition of sex workers that campaigned for Begum's funeral, recalled the indignity with which women were usually buried.
"If we wanted to bury the dead in the morning, villagers would chase us with bamboo sticks," she told AFP.
The brothel where Ms Begum worked - one of 12 legal brothels in Bangladesh - is located about 250 km (155 miles) west of the capital Dhaka.
It was first established about a century ago, under British colonial rule.