'AL to wipe out weeds in Mujib Year' 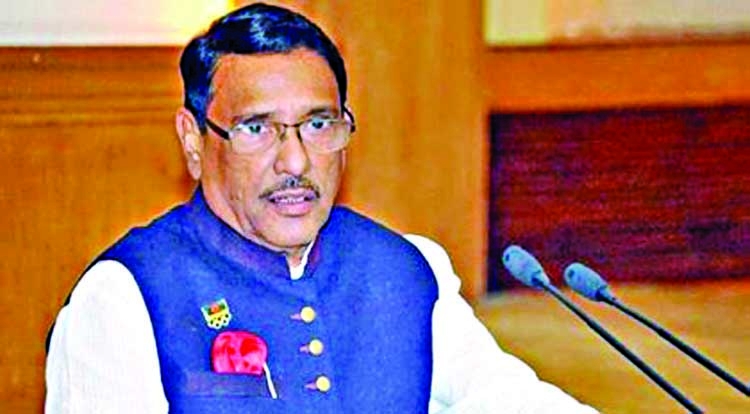 Terming the wrongdoers and opportunists as weeds, Awami League General Secretary Obaidul Quader on Wednesday said they want to wipe out them from the party in the Mujib Year.
He was addressing the triennial council of Kotalipara Upazila AL on the premises of upazila parishad in Gopalganj on Wednesday. Quader said, "Those who stayed with Awami League in its well and woe will be made leaders of the party."  The AL  general secretary urged the leaders of the party at grassroots not to make any room for opportunists and wrongdoers in party committees.
If committees are formed avoiding devoted and dedicated workers, Awami League will hardly find any space to breathe, he observed.
Quader, also the road transport and bridges minister, said Bangladesh had achieved independence under the leadership of undisputed leader of this soil, Father of the Nation Bangabandhu Sheikh Mujibur Rahman, and now the country is gaining economic emancipation under the leadership of Bangabandhu's daughter Prime Minister Sheikh Hasina.
The minister said Sheikh Hasina has earned repute all over the world because of her courage, honesty and dynamic leadership. Turning to country's politics, the AL general secretary said the anti-liberation force- BNP- and its leaders are now out to make complaints to foreigners after coming out unsuccessful in the elections and the movement as well.
By making complaints to foreigners, the BNP leaders are tarnishing the country's image around the world, he added.
Kotalipara Upazila AL President Subhash Chandra Joydhar chaired the function while Gopalganj district unit of AL president Emdadul Haque Chowdhury inaugurated the council.
AL Advisory Council member Kazi Akram Uddin Ahmed, Sheikh Helal Uddin, MP, AL Joint General Secretary AFM Bahauddin Nasim, State Minster for Religious Affairs Sheikh Mohammad Abudllah, AL Organizing Secretaries Mirza Azam, MP and SM Kamal Hossain, Sheikh Salahuddin Jewel, MP and Gopalganj district AL General Secretary Mahbub Ali Khan addressed the function, among others.
In the second session of the council, Bhabendranath Biswas and Md Ainal Hossain Sheikh were made president and general secretary respectively of Kotalipara Upazila AL. AL leaders and workers of the district, upazilas, unions and ward level were present in the council.