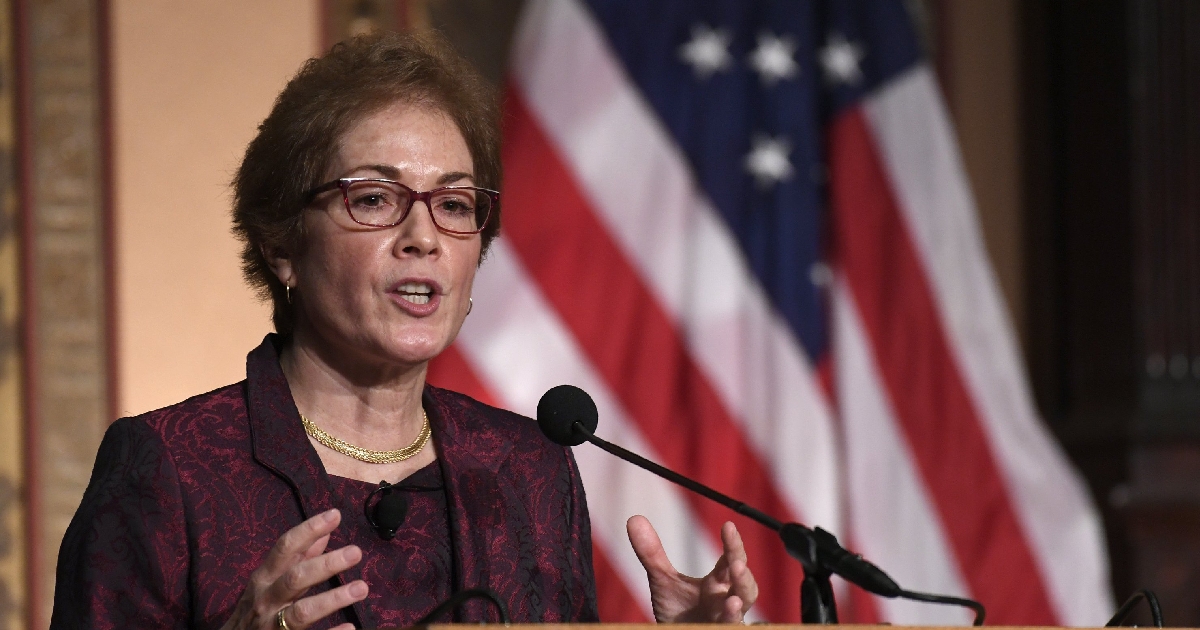 The career U.S. diplomat who was ousted from her post in Ukraine by President Donald Trump, then criticized by him as she testified at his impeachment hearings, urged college students Wednesday to follow in her footsteps because the U.S. "needs diplomats that are ready and capable."
"This country needs a robust foreign policy," Marie Yovanovitch, the former ambassador to Ukraine, said as she accepted the Trainor Award for excellence in diplomacy from the Institute for the Study of Diplomacy at Georgetown University.
Yovanovitch praised the "quiet work of diplomacy" as a way to ensure peace and prosperity in the world.
"It sounds so old-fashioned in our high-tech world, but diplomacy is about human interaction and creating relationships of trust is more important than ever," she said. "It's not as exciting as sending in the Marines, but it's cheaper and usually more effective in the long term."
The award named for Raymond "Jit" Trainor, a former official at the Walsh School of Foreign Service, is presented annually to "an outstanding practitioner" of diplomacy. Recipients have included former Secretary of State Madeleine Albright, former Mexican President Ernesto Zedillo and former U.N. Secretary-General Kofi Annan.
Thomas Pickering, a former U.S. ambassador to the United Nations, said Yovanovitch showed courage not just at diplomatic posts in Russia and elsewhere but in her willingness to testify before Congress, when she was publicly denounced on Twitter by Trump.
"She has, in every sense of the word, acted in the highest tradition of those who serve our country," said Pickering, himself a recipient of the Trainor Award.
Yovanovitch was making her first public appearance since her testimony to Congress about her efforts to press the government of Ukraine to address longstanding U.S. policy concerns about corruption. At that time a back-channel effort led by Rudy Giuliani, Trump's personal lawyer, sought to push the government of the eastern European nation to dig up political dirt to help Trump's reelection.
Giuliani was part of a campaign that led the president to order her removal from her post ahead of schedule last spring. Trump appeared to threaten her, saying she "would go through some things," in a July phone call with the leader of Ukraine that was at the center of the impeachment case against Trump.
Yovanovitch made light of the call during the Georgetown ceremony in one of her few direct references to impeachment. "When you go through some things," she said, drawing laughter, "to fall back on cliche you have to dig deep a little bit."
Yovanovitch, who was removed from her post in May 2019 with no public explanation, described to Congress a "concerted campaign" against her based on "unfounded and false claims by people with clearly questionable motives."
Trump publicly criticized her as she testified, saying on Twitter that "everywhere Marie Yovanovitch went turned bad." Yet, in a nearly 34-year career at the State Department, she received a series of promotions under both Republican and Democratic administrations, with positions that included ambassador to Kyrgyzstan and Armenia.
In a recent op-ed in The Washington Post she called it an honor to represent the United States as an immigrant to the country and defended her decision, and that of other senior officials, to speak up to Congress about what they saw as wrongdoing by the administration.
"When civil servants in the current administration saw senior officials taking actions they considered deeply wrong in regard to the nation of Ukraine, they refused to take part," she wrote. "When Congress asked us to testify about those activities, my colleagues and I did not hesitate, even in the face of administration efforts to silence us."