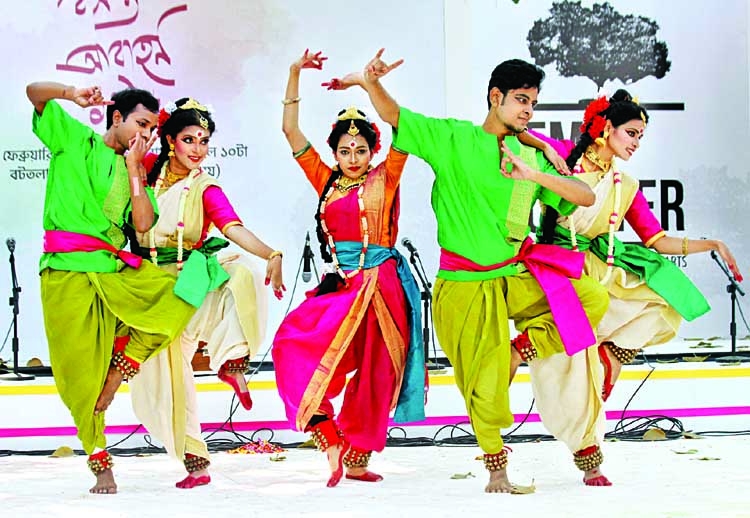 A day-long cultural event titled "Boshonto Abahon 1426" was held at the Bottola of Dhaka University (DU) on Thursday. -AA
A day-long cultural event titled "Boshonto Abahon 1426" was held on Thursday at historic Bottola premises of Dhaka University (DU). Vice-Chancellor of DU Prof Dr Md Akhtaruzzaman inaugurated the program. Dhaka University Dance Department and Edward M. Kennedy (EMK) Center have jointly organized the event to celebrate spring and friendship.
Chairperson of the Department of Dance Prof. Rezwana Chowdhury presided over the program while US Ambassador to Bangladesh Earl R. Miller addressed it as the chief guest. Acting Director of EMK Centre Asif Uddin Ahmed gave vote of thanks. DU Vice-Chancellor Prof Dr Md Akhtaruzzaman said, "US Senator Edward M. Kennedy (EMK) was a real friend of Bangladesh. He visited Bangladesh soon after our independence in 1972 and planted this banyan tree here under which we are now holding this cultural event."
"The banyan tree has been growing for long time as a symbol of friendship between Bangladesh and USA. The friendly ties between the two countries will be strengthened in the days to come, further added Dr. Akthtaruzzan.
A group of performers initiated the cultural part of the program with a group dance performance along with drums beats, which was followed by a Rabindra sangeet by the students of the department of Music, "Shurer dhara", a prominent Bangladeshi music organization also shared the stage with their songs.
In 1972, Senator Edward M Kennedy visited Bangladesh to embolden the friendship among the people of Bangladesh and the United States. He believed that the real foreign policy of America is citizen to citizen, friend to friend, people to people foreign bonds of brotherhood that no tyranny can diminish.
He planted a banyan tree at the premises of the University of Dhaka, in front of the Arts Building on February 14th 1972 during his visit as a token of friendship between the people of Bangladesh and the United States. To mark that remarkable day and celebrate the spirit of Spring, EMK Center and Department of Dance, University of Dhaka has been organizing the program since 2016.