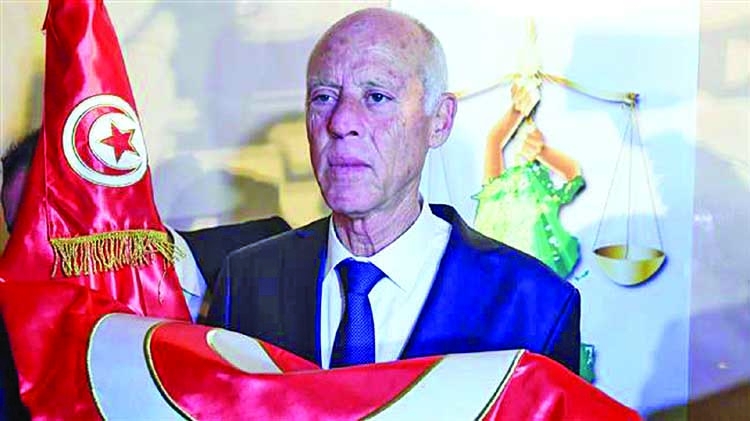 Tunisian President Kais Saied is under fire for firing his country's ambassador to the UN over US President Trump's controversial Middle East peace plan. -AFP
Tunisian President Kais Saied's first major foray into international affairs appears to have backfired, with his diplomatic strategy called into question over the dismissal of Tunis' UN envoy. Saied, a 61-year-old constitutional law expert with no previous political experience, swept to victory on October 13 last year.
He draped himself in a Palestinian flag on the night of his election and has refused a "normalization" of ties with the Jewish state, repeating strongly anti-Israel positions.
But in a sudden twist, Tunisia fired UN envoy Moncef Baati last Friday, accusing him of failing to consult the foreign ministry and other Arab countries on a strongly-worded condemnation of Washington's controversial Middle East peace plan.
"The manner in which the dismissal was carried out raises many questions around the diplomatic strategy of the presidency" and whether the move had been thought through, political commentator Youssef Cherif said. Diplomatic sources said Baati had gone further than Saied had wanted in his criticism of US President Donald Trump's plan, unveiled on January 28 and seen as heavily favoring Israel.
In the week before Baati was fired, Saied had called Trump's proposal the "injustice of the century and high treason" during an interview broadcast on national television. Tunisians took to the streets in protest against the plan in the capital Tunis and the eastern city of Sfax.
The Baati affair has caused concern about Saied's diplomatic acumen and has sent mixed signals about his approach to the Israel-Palestinian conflict, just as Tunisia took up a two-year seat on the UN Security Council in January, where it is the only Arab state represented.
Earlier this week, the Palestinians abandoned their request for a Security Council vote on the Middle East peace plan that they hoped would see the US proposal rejected.
The US had placed "very strong pressure" on other countries on the council, including threats of economic retribution, not to support the Palestinians' request, according to one diplomat, speaking on condition of anonymity.
Media reports also chalked up Baati's removal to US pressure, but the presidency denied it had bowed to any duress, instead accusing the envoy of seeking to "tarnish the image of Tunisia and its president."
---AFP, Tunis