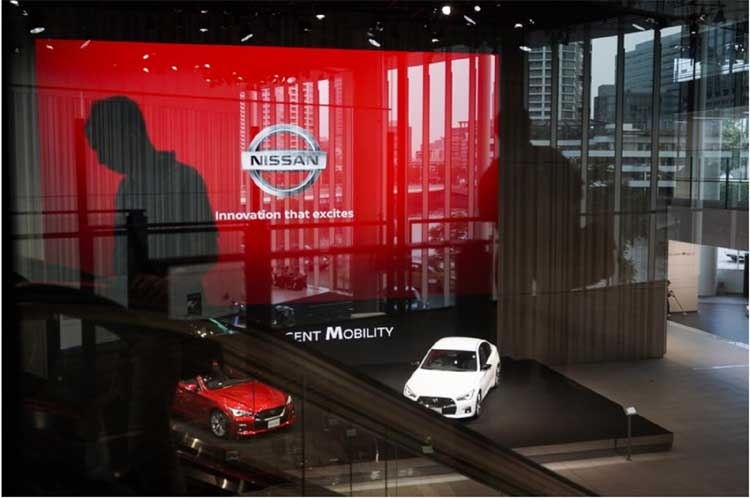 A man rides an escalator as Nissan vehicles are showcased in the Nissan Gallery in Yokohama, west of Tokyo. -AP
Nissan, reeling from a scandal over its former superstar executive Carlos Ghosn, sank into red ink in the latest quarter as its vehicle sales fell around the world, and the Japanese automaker slashed its profit forecast for the year.
Nissan Motor Co. reported Thursday a loss of 26 billion yen ($237 million) for October-December, a reversal from the 70 billion yen profit recorded a year earlier.
Quarterly sales slipped nearly 18% to 2.5 trillion yen ($23 billion), as Nissan's vehicle sales fell in Japan, the U.S., Europe and China. Chief Executive Makoto Uchida told reporters at Nissan's Yokohama headquarters that a turnaround plan was in place, with details to be released in May.
"The situation has worsened, but there is no moment to waste as we must keep investing in future products," he said. "We are headed in the right direction, but it will take time." nHe acknowledged Thursday's results didn't take into account possible damage from production halts in China caused by the new virus outbreak, and further downward revisions may be coming.
---AP, Tokyo