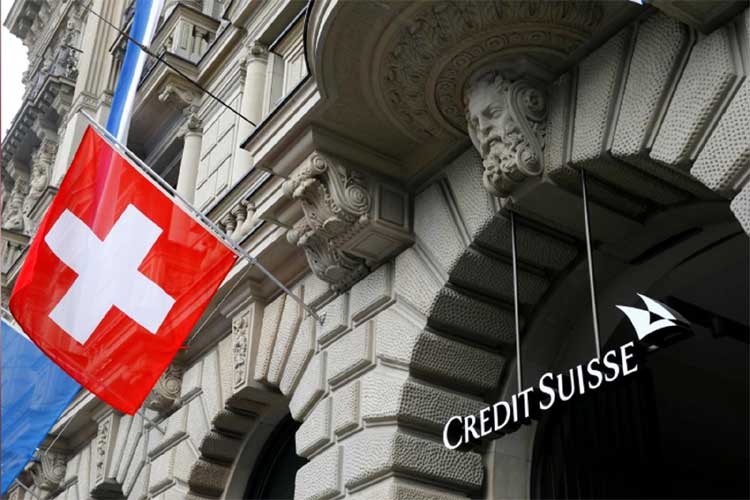 Switzerland's national flag flies beside a logo of Swiss bank Credit Suisse at its headquarters at the Paradeplatz square in Zurich. -Reuters
Credit Suisse posted its best annual profit in nearly a decade on Thursday but volatile earnings at its investment bank and trading divisions took some of the shine off outgoing CEO Tidjane Thiam's swan song.  Thiam quit after a spying scandal at the bank sparked a boardroom revolt and will leave formally on Friday. He will be replaced by company veteran Thomas Gottstein.
Hailing a turnaround initiated shortly after his arrival, Thiam told analysts Switzerland's second-biggest bank would continue to benefit from its strategy focusing on wealth management, while maintaining investment banking activities to support its business with the world's rich.
"My job description is not to make myself indispensable, it's to build a successful company. And we're in a good place," he told analysts on a call. Gottstein, a long-time dealmaker promoted under Thiam to run the lender's newly created domestic unit in 2015, confirmed the group's commitment to the strategy and targets announced under Thiam.
At 3.419 billion Swiss francs ($3.50 billion), the bank's 2019 profit was the best in nearly a decade, but a steeper-than-expected loss in its investment banking business and volatility in its markets unit divisions, where profits rebounded, underscore the challenges facing Gottstein.
--Reuters, Zurich