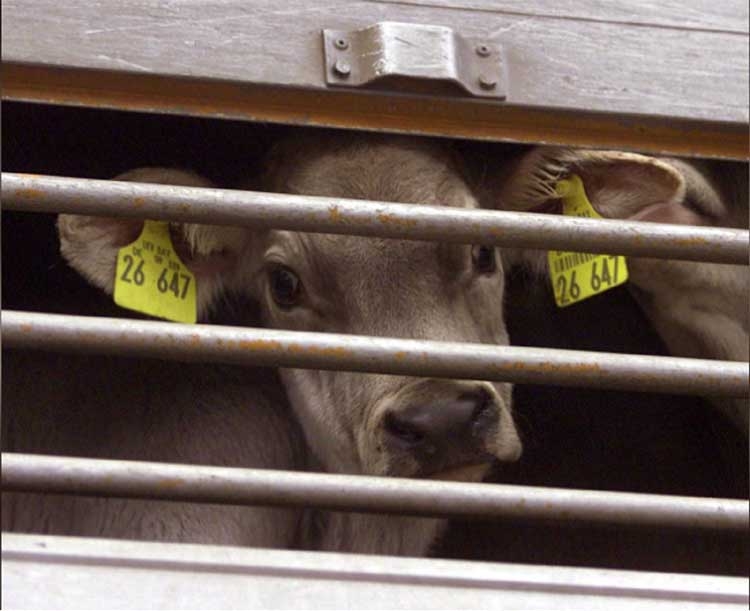 A young calf looks out from a truck in Westerheim, Germany. -Reuters
The specter of the 1990s BSE crisis means the European Union is likely to reject U.S. demands it ease strict food safety rules, even with President Donald Trump threatening car tariffs if EU countries do not start importing more U.S. farm products.
With European food and farming exports to the United States worth up to $12 billion a year more than imports, U.S. Secretary of Agriculture Sonny Perdue told the EU last month it should adapt its food regulations to reflect "sound science". But there seems little prospect Brussels will agree. Europeans who remember BSE, nicknamed mad cow disease, will not accept any lowering of food standards and no politician could support a trade deal perceived as doing so, said Johan Bjerkem, trade specialist at the European Policy Centre.
"On top of that, you're negotiating with Trump, for whom not many Europeans have great sympathy," he said. "Combine these things and it will be very difficult to accept a deal on those issues." Trump, who has long complained that the EU's position on trade is "worse than China," said on Monday he was training his sights on Europe, raising the prospect of a new trade war.
The EU bans imports of meat treated with growth hormones or poultry washed with peracetic acid, often dubbed 'chlorinated chicken'. Both are standard U.S. farming practices. Washington points to inconsistencies - EU salad leaves are regularly washed with chlorine - and says EU rules are a smokescreen for protectionism.
---Reuters, Brussels