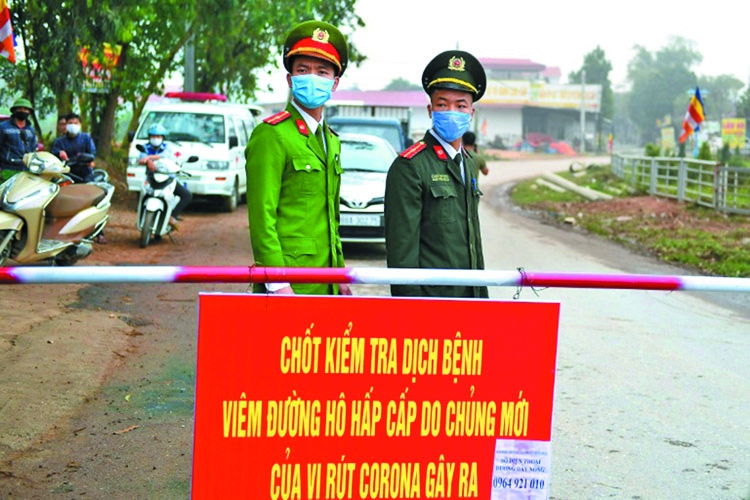 Vietnamese police stand guard at a checkpoint set up at the Son Loi commune in Vinh Phuc province amid concerns about a COVID-19 coronavirus outbreak. -AFP
Villages in Vietnam with 10,000 people close to the nation's capital were placed under quarantine on Thursday after six cases of the deadly new coronavirus were discovered there, authorities said.
The locking down of the commune of Son Loi, about 40 kilometers (25 miles) from Hanoi, is the first mass quarantine outside of China since the virus emerged from a central Chinese city late last year. "As of February 13, 2020, we will urgently implement the task of isolation and quarantine of the epidemic area in Son Loi commune," said a health ministry statement. "The timeline... is for 20 days". Son Loi is a farming region made up of several villages.
The health ministry previously said five people in Son Loi had been infected with the virus, and on Thursday reported a sixth case. On Thursday, checkpoints were set up around the commune, according to AFP reporters in Binh Xuyen, a district on the outskirts of Son Loi. Health officials wearing protective suits sprayed disinfectant on vehicles by the checkpoints.
Villager Tran Van Minh told AFP that authorities had already advised residents to avoid large gatherings. "Life has been badly affected," he told AFP by phone, adding that much of the labour force is reliant on jobs in construction and house painting. "Now we cannot get out and even if we do, clients don't welcome us that much as before."
--AFP, Hanoi