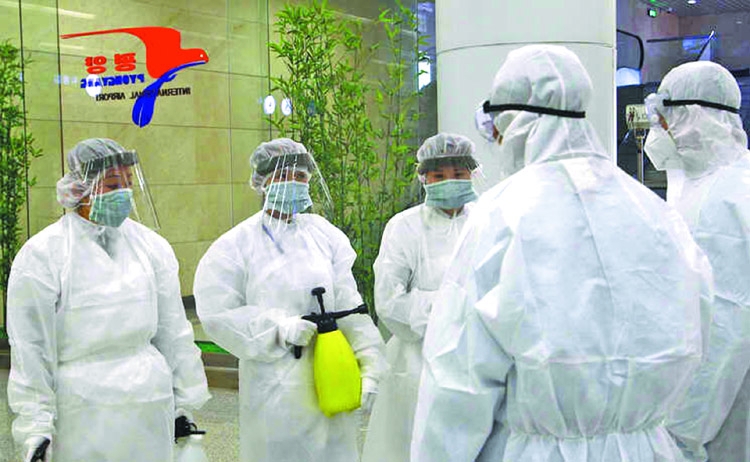 A North Korean official has been executed for going to a public bath while he was meant to be in quarantine, a report in the South has claimed.
The trade official was arrested and immediately shot after risking the spread of coronavirus by visiting the public bath, the Dong-a Ilbo newspaper reported. The official had been placed in isolation after travelling to China, with Kim Jong-un imposing military law to enforce the lockdown, sources said.
North Korea has not yet confirmed any cases of the virus, but has taken drastic measures to stop it spreading over its border with China.  The trade official was reportedly quarantined under a policy of isolating anyone who had been to China or had contact with Chinese people. He is said to have fallen foul of a decree by Kim Jong-un which vowed to 'rule by military law' against anyone who left quarantine without approval.
Another official is said to have been exiled to a North Korean farm after trying to cover up his travels to China.  The second official was reportedly a member of the secretive kingdom's National Security Agency.   Claims of blundering officials being purged or executed are common in North Korea and are very hard to verify.  Last year, widespread rumors that a top official had been exiled over a failed summit with Donald Trump proved incorrect when he appeared with Kim in public.
Yesterday Pyongyang announced that quarantines had been extended to 30 days, beyond the 14-day period recommended by world health bosses.  Government institutions and foreigners living in North Korea were expected to obey it 'unconditionally', North Korean media said.
North Korea has almost completely closed the border with China, its only major diplomatic ally.  Flights have been reduced with road and rail links either closed or heavily restricted, while foreign tourists have been banned.  The DMZ between North and South Korea is already heavily fortified and very few people cross it in any case.
Pyongyang has also suspended operations at a liaison office it has jointly run with South Korea located just north of the border.  State media reported that North Korea's Red Cross Society had deployed to 'relevant areas' around the country to monitor people with possible symptoms.
'They are conducting information activities in various forms and by various methods at public places to introduce common medical knowledge about the epidemic and encourage people to give fuller play to the noble moral traits of helping and leading each other forward,' KCNA reported.
Tens of thousands of North Korean workers were believed to be working in China before a UN order for Beijing to send them back home expired in December.  It was unknown how many of them have returned home.  World Health Organisation officials based in Pyongyang have said they are not aware of any confirmed cases.
However, some South Korean media outlets have reported multiple cases and even possible deaths from the virus in the North.
North Korea took similar tough quarantine measures during the 2002-03 spread of SARS, which also began in China.
The North did not report any SARS cases at the time, according to the South Korean government.