Hunt on for 'patient zero' 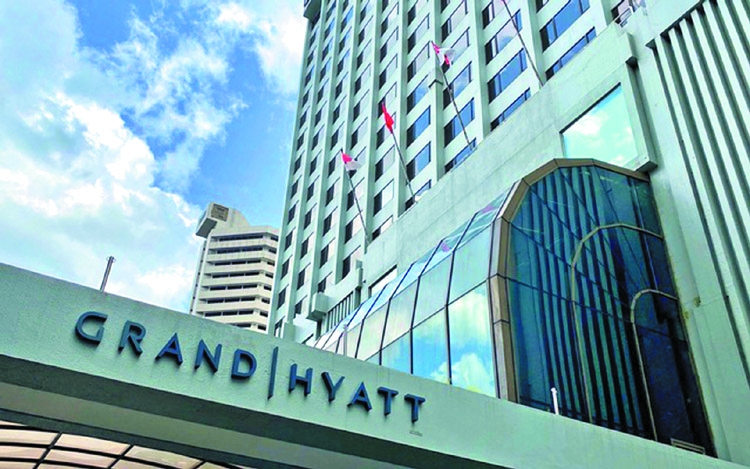 The facade of the Grand Hyatt hotel in Singapore February 5, 2020. -Reuters
As lion dancers snaked between conference room tables laden with plastic bottles, pens, notebooks and laptops, some staff from British gas analytics firm Servomex snapped photos of the performance meant to bring good luck and fortune.
But the January sales meeting in a luxury Singapore hotel was far from auspicious. Someone seated in the room, or in the vicinity of the hotel that is renowned for its central location and a racy nightclub in the basement, was about to take coronavirus global.
Three weeks later, global health authorities are still scrambling to work out who carried the disease into the mundane meeting of a firm selling gas meters, which then spread to five countries from South Korea to Spain, infecting over a dozen people. Experts say finding this so-called "patient zero" is critical for tracing all those potentially exposed to infection and containing the outbreak, but as time passes, the harder it becomes.
"We do feel uncomfortable obviously when we diagnose a patient with the illness and we can't work out where it came from...the containment activities are less effective," said Dale Fisher, chair of the Global Outbreak Alert and Response Network coordinated by the World Health Organisation.
Authorities initially hinted at Chinese delegates, which included someone from Wuhan - the Chinese city at the epicentre of the virus that has killed over 1,350 people. But a Servomex spokesperson told Reuters its Chinese delegates had not tested positive.
Fisher and other experts have compared the Singapore meeting to another so-called "super-spreading" incident at a Hong Kong hotel in 2003 where a sick Chinese doctor spread Severe Acute Respiratory Syndrome around the world.

The WHO has opened an investigation into the Singapore incident, but said its "way too early" to tell if it is a super-spreading event.