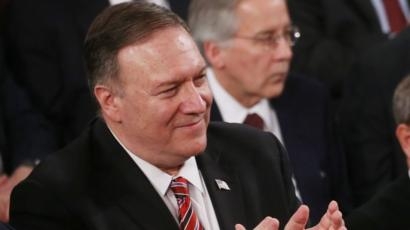 US Secretary of State Mike Pompeo says there has been a "pretty important breakthrough" in peace talks with the Taliban in recent days.
Defence Secretary Mark Esper earlier said they had "negotiated a proposal" for a week-long reduction in violence.
The two sides have long been engaged in negotiations aimed at ending the 18-year war in Afghanistan.
But they have been fraught with challenges. President Donald Trump declared the talks "dead" in September.
On Thursday, Mr Pompeo said the US president had given the go-ahead for further talks. He hailed recent progress, but said the negotiations were complicated and that a peace deal had not yet been reached.
"We hope we can get to the place where we can get a significant reduction in violence, not only on a piece of paper," he said. "If we can get there and we can hold that posture for a while, we may well be able to begin the serious discussion which is all the Afghans sitting at a table finding a true reconciliation."
His comments came after Mr Esper told reporters about the proposal for a "seven-day reduction in violence".
"We've said all along that the best, if not only, solution in Afghanistan is a political agreement. Progress has been made on this front and we'll have more to report on that soon," he said. "It will be a continual evaluative process as we go forward - if we go forward."
Details about when the partial truce was set to begin were not immediately clear, but a Taliban official told AFP news agency that the group would begin a "reduction of violence" on Friday.
Mr Trump has made withdrawing US troops from Afghanistan a key foreign policy aim. Some 13,000 US troops remain in Afghanistan after the US intervention to oust the Taliban in 2001.
How did we get here?
In December 2018, the Taliban announced they would meet US officials to try to find a "roadmap to peace". But the militants continued to refuse to hold official talks with the Afghan government, whom they dismissed as American "puppets".
Following nine rounds of US-Taliban talks in Qatar, the two sides seemed close to an agreement. Washington's top negotiator announced in September that the US would withdraw 5,400 troops from Afghanistan within 20 weeks as part of a deal agreed "in principle" with Taliban militants.
But days later, Mr Trump said the talks were "dead", after the militant group admitted to killing a US soldier.
"They thought that they had to kill people to put themselves in a little better negotiating position", he told reporters, calling the attack "a big mistake".
In the months since the deal collapsed, there has so far been no let-up in fighting. The Taliban has warned that the US would "lose the most" by cancelling the talks.
The announcements by the US on Thursday came after Afghan President Ashraf Ghani said he had been informed of "notable progress" in the talks, which his government is not involved in.
What's the background to the Afghan war?
The Taliban, or "students" in the Pashto language, emerged in the chaos that followed the withdrawal of Soviet troops from Afghanistan in 1989.
They took Kabul in 1996 and were in charge of most of the country within two years, practising their own austere version of Sharia, or Islamic law.
The Afghan war began when the US launched air strikes a month after the 11 September 2001 attacks and after the Taliban refused to hand over the man behind them - Osama Bin Laden.
The US was joined by an international coalition and the Taliban was quickly removed from power. However, they turned into an insurgent force and continued deadly attacks, destabilising subsequent Afghan governments.
The coalition ended its combat mission in 2014, staying only to train Afghan forces. But the US continued its own, scaled-back combat operation, including air strikes.
Meanwhile, the Taliban has continued to gain momentum. In 2018, the BBC found they were active across 70% of Afghanistan.