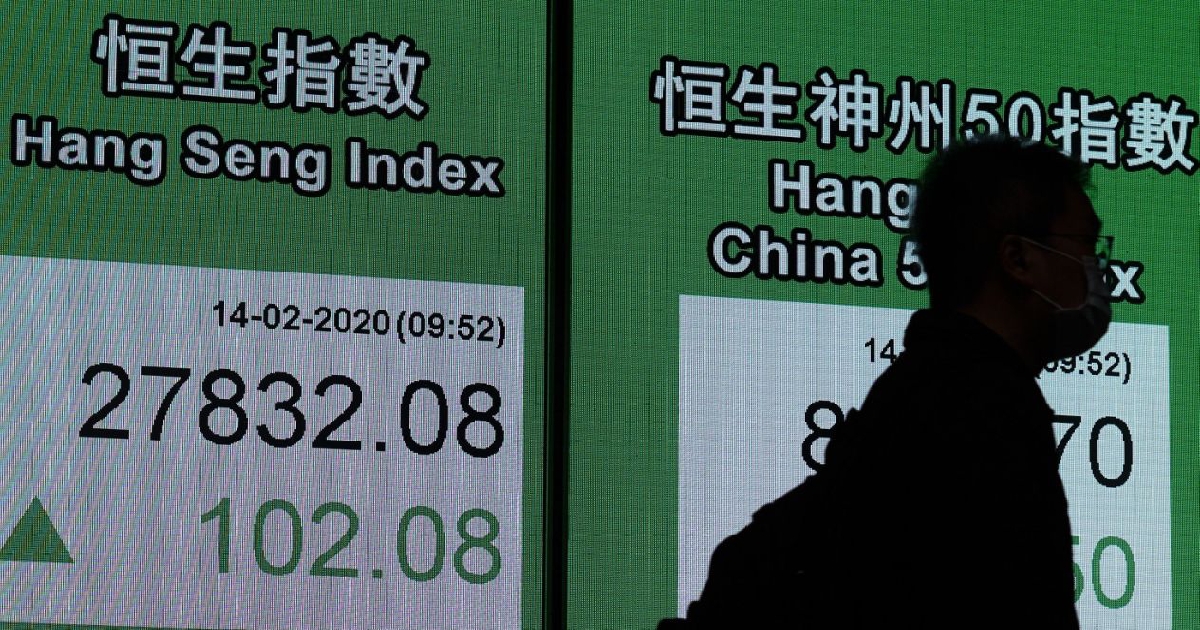 Shares rebounded in Asia on Friday after an early sell-off, though Japan's benchmark declined as investors reacted to news of a growing number of cases of a new virus among the local population.
The Nikkei 225 fell 0.6% in morning trading to 23,683.44. Australia's S&P/ASX 200 gained 0.4% to 7,134.70. South Korea's Kospi advanced 0.5% to 2,243.36 and Hong Kong's Hang Seng jumped 0.6% to 27,902.12. The Shanghai Composite index gained 0.6% to 2,923.90.
India's Sensex added 0.2% to 41,561.86. Shares were higher in Taiwan and Southeast Asia.
Investors had largely set aside worries about the economic impact of the virus outbreak the past two weeks. Markets rallied this week partly because the number of new cases appeared to be slowing. But those hopes were dashed by sharp increases in both the number of cases and newly reported deaths Thursday after the hardest-hit province of Hubei began counting doctors' diagnoses without waiting for laboratory results in hopes of getting patients treated faster.
In Japan, concern rose after the government reported another case, a Japanese man in his 70s, a day after it reported its first death from the virus. Japan now has 252 confirmed cases, including 218 from a cruise ship that has been quarantined in Yokohama. Officials said there were signs the virus was spreading within the local population.
Overnight on Wall Street, the S&P 500 index dropped 0.2%, to 3,373.94 and the Dow Jones Industrial Average slid 0.4% to 29,423.31. The Nasdaq edged 0.1% lower, to 9,711.97. The Russell 2000 index of smaller company stocks rose 0.3% to 1,693.74.
The virus has added a whole universe of uncertainty to the outlook for many industries.
"We're in a data-dearth period in the sense that we're not really going to know fully the effects of the impact of that on Asian and Chinese growth, as well as global growth, for at least several weeks," said Lisa Erickson, head of traditional investments at U.S. Bank Wealth Management. "You're just going to see some back-and-forth movement (in the market) until that time."
The reclassification of the COVID-19 cases in Hubei brought a huge increase in the global tally, complicating efforts to understand the trajectory of the outbreak.
But Stephen Innes chief market strategist at AxiCorp, said he believes the economic impact from the virus outbreak would likely be limited and the disease might be contained by March.
"The market impact was little more than a pause in the general bullish upward trend rather than risk-off," he said, referring to the reaction to the higher case numbers.
Businesses have already been hurting due to the outbreak and more of them are warning that the effects will linger through the year.
Organizers of the world's biggest mobile technology fair cancelled the event, set to take place in Spain, because of health and safety concerns. Europe has had a scattered number of cases, mostly connected to Chinese travel.
Travel-related companies fell broadly Thursday, shedding some of their gains from earlier in the week. Airlines helped pull industrial sector stocks lower. United Airlines fell 1.5%.
MGM Resorts International, which gets about 20% of its revenue from the gambling haven of Macau, pulled its profit forecast for 2020. The stock lost 5.5%. Cruise line operator Carnival slid 2%.
Technology and health care stocks were among the biggest decliners, along with companies that rely on consumer spending. Cisco Systems fell 5.2%, Mylan slid 2.3% and Hanesbrands dropped 2.6%.
Household goods makers, utilities, real estate companies and communication services stocks notched gains.
Fashion company Ralph Lauren warned that the viral outbreak cut into fourth-quarter sales by an estimated $55 million to $70 million. The stock fell 0.6%.
Alaska Air Group bucked the trend, adding 1.5% after the airline said it will cooperate more closely with American Airlines on West Coast service. The airlines asked for government permission to expand revenue-sharing to cover international flights in Seattle and Los Angeles.
ENERGY:
Benchmark crude oil rose 5 cents to $51.47 a barrel in electronic trading on the New York Mercantile Exchange. It rose 25 cents to settle at $51.42 a barrel on Thursday. Brent crude oil, the international standard, was 1 cent higher at $56.35 a barrel.
CURRENCIES:
The dollar slipped to 109.80 Japanese yen from 109.82 yen on Thursday. The euro weakened to $1.0840 from $1.0843.