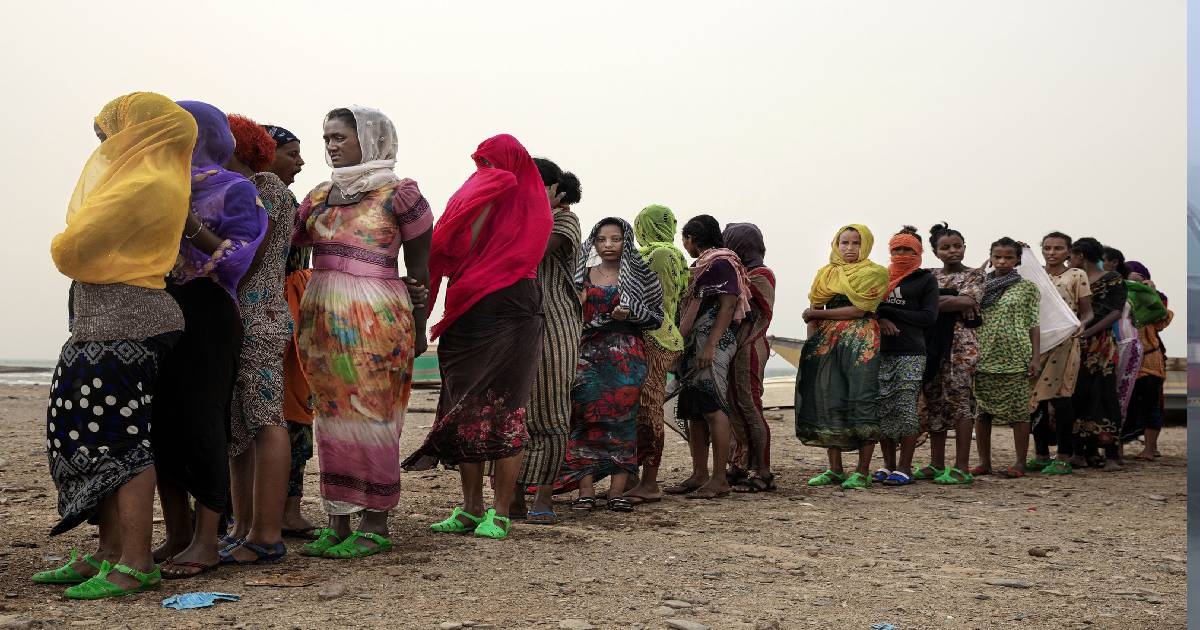 They are among the most vulnerable of the tens of thousands of migrants making the long and perilous trek from Ethiopia to Saudi Arabia in search of jobs: Women and girls as young as 13. They endure hunger and exhaustion walking through deserts, the dangers of a sea crossing and, often, rape and torture at the hands of traffickers.

Still, they are fearless and determined to reach the oil-rich kingdom and work as maids and domestic servants in Saudi Arabia's lavish households. Dreaming of improving their lives, many of them sneak away from home in the night because their parents don't want them to take the risk.

Around 150,000 migrants made the journey each of the past two years, and the proportion of women and girls is rising. According to the U.N.'s International Organization for Migration, the number of women making the trip jumped from nearly 15,000 in 2018 to more than 22,000 in 2019. The number of girls had an enormous increase, quadrupling from 2,075 to 8,360.

Associated Press photographer Nariman El-Mofty traveled with a number of women and girls along the trail, in Djibouti and Yemen, capturing intimate moments of their journey and talking with them about their reasons for leaving home and the dangers they are willing to face in hopes of a better life.

This story is part of an occasional series, " Outsourcing Migrants," produced with the support of the Pulitzer Center on Crisis Reporting.

Willo (L) and Medres, two 15-year-old Ethiopians, were among a group of girls waiting at Djibouti's coast for the smuggler boat to Yemen. They seemed to know little about the risks ahead. Asked if she knew there was war in Yemen, Willo just shook her head "no." In Saudi Arabia, studies say women domestic servants often face abuse by employers. But Medres said she's certain she'll get a good job as a maid, earning up to $700 a month, and even learn some Arabic and English. "There is a future in Saudi Arabia for us," she said.

THE TREK THROUGH DJIBOUTI

The journey to Saudi Arabia begins with a trek through Djibouti, a tiny country in the Horn of Africa that sits on the Gulf of Aden. Some migrants remain in Djibouti to work, while others travel across the desert to the uninhabited coast outside Obock, where smugglers launch boats to Yemen. Along their journey, many women are tortured or raped by smugglers. That's why some women, as soon as they enter Djibouti from Ethiopia, stop at the hospital in the border town of Dikhil and ask for birth control.

At the Obock coast, a group of teenage girls from Ethiopia rested under acacia trees for shade. They were waiting for the smuggler's signal to take the wooden fishing boats to Yemen, crossing the narrow Bab al-Mandeb strait at the mouth of the Red Sea. The girls all said they left homes against their parents' will. They said they depend on their helper, Abdullah, a 28-year-old Ethiopian who made the journey five times before over the past 10 years.

Ikram Abdi, 17, and Hamdiya Abdullah, 16, were among 150 migrants who gathered in Dikhil after crossing into Djibouti from Ethiopia. "Nothing to fear," Abdi said shyly when asked if she worried about abuses along the way. Like many migrants, they disappeared from home in the night, telling no one of their planned journey. They hope their parents will forgive them once they send money from Saudi Arabia. "My family doesn't know," Abdullah said, "but living conditions are pushing us to leave."

Raheema Sanu, 18, rested by the side of the highway just a few kilometers inside Djibouti after she and her brother crossed from Ethiopia, Still early in their journey, they already trekked through mountains and deserts, in sandstorms and temperatures over 113 degrees. Some migrants had collapsed from heat and exhaustion. The past three days, they lived on bits of bread washed down with salty water from desert wells used by camel and goat herders. But she knows the road ahead: A relative already in Saudi Arabia advised her on the best route so she wouldn't need a smuggler.

A woman's bra lay half-buried in the beach at Obock, Djibouti. As migrants prepare for the smugglers' boat trip across the Bab al-Mandab strait to Yemen, they try to travel light, and the beach is littered with clothes and personal items they decided to discard. They also try to protect what they will need for the road ahead, tucking documents, photos and cash into plastic bags to protect them from the water.

Dozens of Ethiopian men, women and children sat in total silence after being loaded into the smugglers' 50-foot-long open boat. They were ordered to crouch in the bottom and not move or say a word during the crossing to Yemen or they'd face a beating by the captain or his crew. Fear, hope and expectation tensed their faces. Most of the migrants had never seen the sea. They would be packed on the boat for hours on open water in total darkness.

After their six-hour journey from Obock, Ethiopian migrants finally arrived in Yemen, at the beaches near the tiny fishing village of Ras al-Ara. As they waded through the surf, they washed out clothes soiled in the long trip. Some will make their way to the road and continue their trips. Many are immediately met on shore by traffickers who load them on trucks and take them to ramshackle compounds in the desert where they rape and torture migrants, demanding more money.

Dozens of Ethiopian women sat inside a compound, known as "hosh" in Arabic, as they wait for the next leg of their journey to Saudi Arabia in Ras al-Ara. While some "hosh" are horrific torture and detention centers, others are simply way stations for migrants. It all depends on the trafficker. Reliable organized smugglers transport migrants in stages across Yemen in relative safety. For thousands of others without a guide, it's a confusing and dangerous march alone down unfamiliar roads and highways.

Fatma Mohammed and her husband — migrants from Mali — wandered around the edges of Ras al-Ara balancing their two children and their belongings — lost. They had been stranded in the village since landing there days earlier. They had no money for a vehicle to take them further on their journey and couldn't walk carrying their children on the long desert highways to the next city, Aden. They spent their days sitting by the village mosque, getting bits of food and water from passers-by and hoping for a ride.

Dasto Mohammed, 22, and her younger sister Fadya languished at a hospital in Ras al-Ara after a rough sea crossing to Yemen. Dasto (L) cut her foot on coral in the surf as they landed, screaming in pain. Fadya was vomiting. They had had an arduous journey already from their home in Harar, Ethiopia, through Djibouti. It took a month to walk because Dasto has heart problems and had to stop often. In Djibouti, traffickers imprisoned them and beat them until their parents, poor farmers, borrowed $700 to send them. "I called my mother crying, 'Mom, I need money,'" Fadya recalled.

For Ethiopians who journey through Somalia instead of Djibouti, their landing point in Yemen is Beir Ali, a tiny village near the center of the southern coastline. Landing here saves a long trek across southern Yemen. But it means a longer boat trip, nearly 200 miles across the Gulf of Aden from the Somali port city of Basaso. If all goes well, the voyage takes about 30 hours. Most migrants are exhausted and dehydrated by the time they land.

Hades, 16, called home to her mother before crossing from Djibouti to Yemen. It's the first time she has spoken to her mother since she snuck out of her house in Ethiopia at night. She was optimistic and excited, assured by friends and her smuggler that she would easily get a job in Saudi Arabia and could even learn some English there. She didn't know that there is a civil war in Yemen.

The key on Fatmah Mohammed's necklace is to the door of her home in Ethiopia, where the teen longs to return once she earns money. "It reminds me of my family," she said. She was walking along the 130-kilometer desert highway to the Yemeni city of Aden, along with other migrants she met on the crossing from Djibouti. In Aden, she hoped to work a while before heading to Saudi Arabia. But many migrants end up stranded in the city's slums.