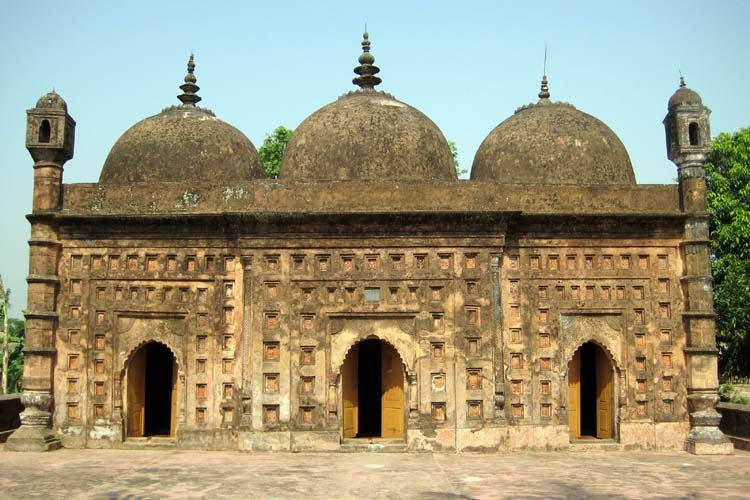 Nayabad Mosque is located in the bank of the river Dhepa, just 1.5 km south-west of the infamous Kantaji Temple at Dinajpur in Bangladesh. The mosque is named after the village "Nayabad" in which it stands in the Police Station of Kaharole.
According to an inscription found on the central doorway, it was constructed at 1793 AD in the reign of Mughal Emperor Shah Alam II. During that period, Raja Baidyanath, the last of the Dinajpur Royal family, was the Zaminder (feudal land owner).
Nayabad Mosque was erected at a time when the soil of Dinajpur had already been enriched with one of the most remarkable Navaratna temples, the Kantajew Temple in 1752 AD. The founding Royal family of Dinajpur was still prominent. According to local traditions, the mosque was built by Muslim architectural workers who had come to this place from the west to build Kantaji Temple.
They had settled in Nayabad, a village near the temple, and had built the mosque for their own use. There is a grave of an unknown person in the premises of the mosque. Local people believe, this is the grave of Kalu Khan, the master architect of Kantaji Temple. 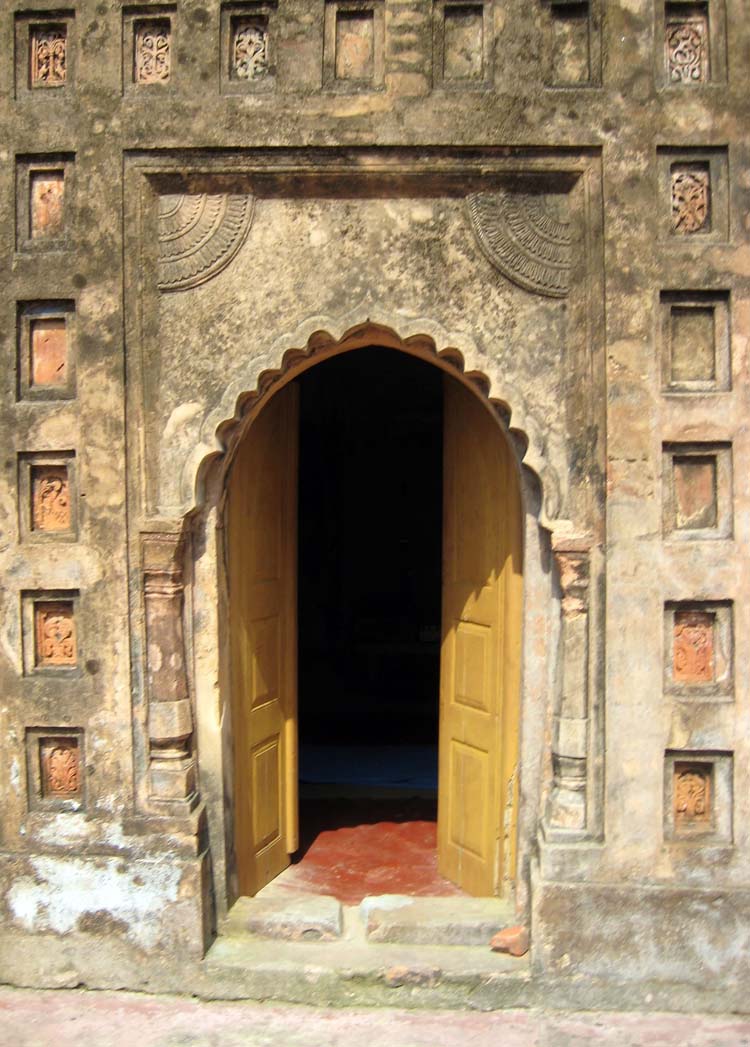 It is an oblong three-domed mosque with octagonal towers at the four corners. There are three arched entrances to enter the mosque. Among them, the central one is bigger than the flanking ones.
These are equal in height and width. There is an arched window each on the south and north sides. Inside in the western wall there are three Mihrabs in line with the three entrances. The central Mihrab is bigger than the flanking ones which are of equal size. Three hemispherical domes cover the mosque, of which the central one is bigger than the side ones. Pendentives have been used in their phase of transition. The parapet and cornice are straight.
Terracotta plaques have been used in decoration of the mosque. At present there are about 104 terracotta plaques rectangular in shape, used in the surface decoration of the mosque walls. The platform of the mosque is enclosed by a low brick wall with only one access from the east. On either side of the mosque are to be seen a number of tombs each of found fixed over the central doorway of the mosque.
How to go: One can start his journey for Nayabad Mosque from Dinajpur town. From the Dinajpur bus station take a bus headed to Birganj& drop at a location called Baro Mile (twelve miles) which will cost nearly 25-30 taka.
After Reaching Baro Mile point cross the Dhepa River. Travelers will find boatman waiting for crossing the silky river to Kantanagar village. Than just little walk will lead the travelers to the premises of the temple. There is a road to the North Wast side of the temple, which lead the travelers to the Nayabad village, just a 15 minutes' walk. Enjoy.
Things to do
*    You enjoy architectural beauty of 1793 AD
*    Also enjoy boating on the way.
Eating facilities
*   There are no eating facilities in Nayabad Village but you can find great restaurants in Dinajpur town.
*    To know more about the hotels of Dinajpur, please click here
Travel tips
*    There is a small market where you can find different types of items that are related with these places. These are really nice places that are very charming.