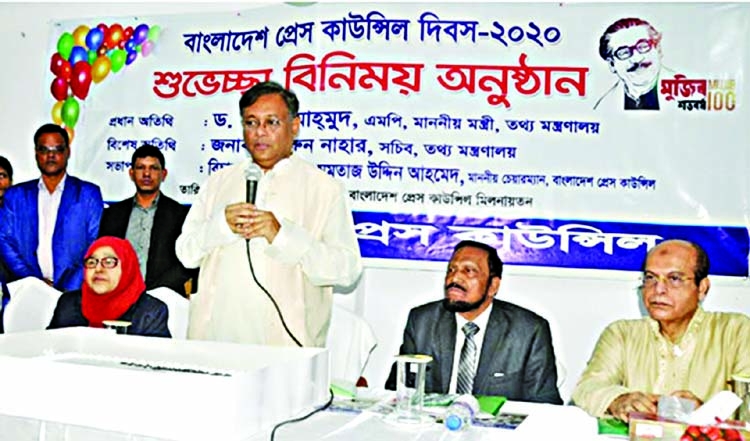 Information Minister Dr Hasan Mahmud speaks during a meeting on Friday. -AA
Information Minister Dr Hasan Mahmud on Friday stressed the need for bringing discipline in media as the country saw an exponential growth of mass media in the last 10 years."Today, media does not mean newspaper only. Now it includes newspapers, televisions, radios and online news portals…the canvas of newspapers has changed in the last 10 years," he told a meeting, reports BSS.
Bangladesh Press Council arranged the meeting at its office marking the Press Council Day. Speaking as the chief guest, Dr Hasan said many challenges are now added to media as it has seen a rapid growth in the country. He observed that if any fake news is published in any media, it may cause harm to the society and the state as well.
Many consider the social media as a mass media but it is an un-edited platform, not a medium, he said, adding that many start to introduce themselves as journalists by holding cards of online portals but they are not journalists at all. Hasan, also the Awami League joint general secretary, urged the Bangladesh Press Council to prepare a work plan aiming to bringing discipline in media and ensure objective journalism in the country.
He said media is now enjoying absolute freedom but it should function in such a way that the freedom of others is not hampered. About the Press Council, the information minister said Father of the Nation Bangabandhu Sheikh Mujibur Rahman had passed the Press Council Act, 1974 and then the Bangladesh Press Council was formed aiming to flourish media in the country. Like the Press Council Act, 1974, he said, Bangabandhu enacted many laws in his tenure to advance the nation.
Noting that Bangladesh is now a role model of development under the leadership of Prime Minister Sheikh Hasina, Dr Hasan said: "Building a pluralistic and equity-based society is our main goal."
Chaired by Chairman of Bangladesh Press Council Justice Md Mamtaz Uddin Ahmed, the meeting was also addressed by Information Secretary Kamrun Nahar and Editor of The Daily Observer Iqbal Sobhan Chowdhury.