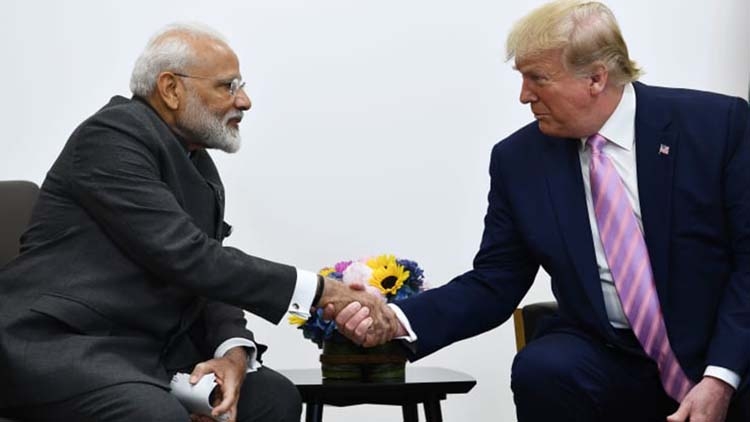 President Donald Trump is hoping to sign another trade deal before the 2020 election. It could be with India, if he and Prime Minister Narendra Modi can come to terms during Trump's official trip to the country in less than two weeks.
Despite multiple attempts, the two countries' trade teams have struggled to see eye to eye in countless meetings in Washington, New Delhi and New York held over the last 18 months yielding no results.
"I expect that the trade deal-which has been previewed for months, but apparently at last reaching a conclusion-will be a major focus of the visit," Alyssa Ayres, senior fellow at the Council on Foreign Relations said in an interview.
Experts say the constructs of the trade agreement - and whether it can even be called a trade deal - will be determined by the outcome of U.S. Trade Representative Robert Lighthizer's trip to India this week.Defense, energy, medical devices and agriculture are among the items said to be on the table, according to Eurasia analyst Akhil Bery.
The New York Times reported on Monday that India was preparing to buy U.S. military helicopters from Lockheed Martin for $2.6 billion ahead of Trump's visit. Since Modi was elected, the country has been steadily increasing its purchases of U.S. defense equipment.
?[Defense] been an area of significant progress in the relationship," said Ayres.In exchange for the purchase of 24 Seahawk helicopters, Jonah Blank of Rand Corp. expects that the U.S. may roll back tariffs on select American exports.
"The main deliverables are likely to include announcements of Indian purchases of US military hardware, particularly a $2.6 billion deal for 24 Seahawk (MH-60R) helicopters; in return, the US may announce a year (or more) of duty-free waivers for some of the 2,000 products on which it levied tariffs last year," Blank said to CNBC.

Tensions over trade statusTensions between the United States and India rose after the U.S. administration stripped India of its special trade status last May which gave the allied country access to $5.6 billion of exports, duty free.In response, India unveiled retaliatory tariffs on 28 U.S. items, including apples and almonds.
Relations seemed to have improved following Modi's visit to the U.S. in late September as both leaders hugged at a "Howdy, Modi!" event in Houston, where roughly 50,000 Indian Americans cheered Modi and Trump on stage at NRG Stadium.
Following the signing of the "phase one" trade deal with China, political experts say Trump is incentivized to secure some type of deal with India before the presidential election.A senior governmental official in India tells CNBC Modi is also hoping to position Trump's visit as political win at a time when he's facing domestic pressures.
"Indians appear quite confident that President Trump has a very good shot at winning the upcoming Presidential election. I just spent 4 weeks in India, criss-crossing the nation. Nobody seems to be treating the visit as a "lame-duck," said Rick Rossow, Wadhwani Chair in U.S.-India Policy Studies at CSIS, to CNBC.

Kashmir questionsMost policy experts do not think Trump will discuss Modi's controversial citizenship law and his handling of the disputed region of Kashmir, both of which have drawn criticism and resulted in a wave of protests across the nation.
"What I do not expect Trump to raise, although many in the United States are paying increased attention to these issues, are the questions of Kashmir and ongoing detention of political leaders for nearly six months, as well as the ongoing protests concerning the new citizenship law," said Ayres to CNBC.
Rossow agrees."The visit is another sign that, despite contentious social issues in India driven by the ruling Bharatiya Janata Party, the Trump Administration takes the long view. The relationship is too important, both in economic terms and security terms, to put ties on 'pause,'" said Rossow.The trip is expected to begin on Feb. 24 and last two to three days.
A senior Indian government official tells CNBC that Modi's administration is preparing a massive rally in Ahmedabad, Gujarat, where both leaders will likely congregate in front of a massive crowd that will be similar to the Howdy, Modi! event.Seema Mody is a global markets reporter for CNBC, focusing on the intersection of foreign policy and Wall Street
---Seema Mody