Impeachment is over, but despair remains 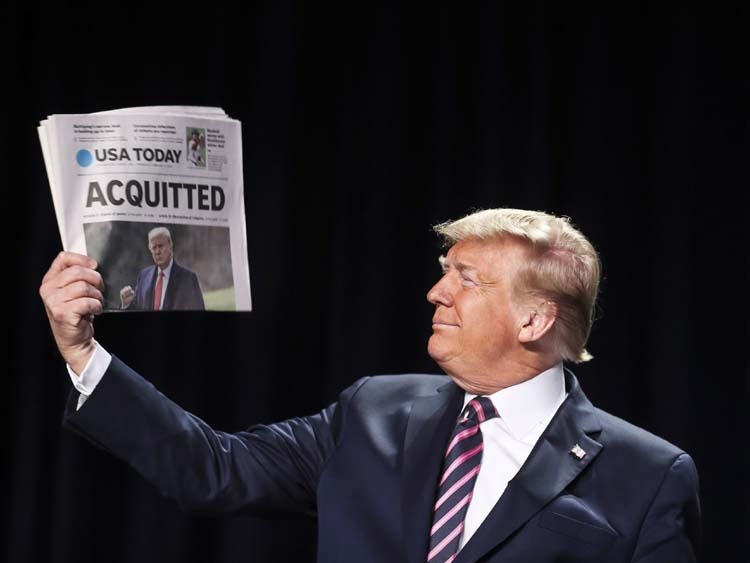 United States President Donald J. Trump's impeachment inquiry has divided American society into thin and thick lines, which could be ascertained from several assessments published during the pre and post-impeachment period.
In this winter, the super-power was at a sombre moment in history, but it's also a pivotal one. What the impeachment process cannot escape from is politics.
According to a survey published on the University of Monmouth website on October 1, 52 percent of respondents opposed the removal of the current leader from his post, while 44 percent supported the initiative of the Democratic Party.Meanwhile, the Hill-HarrisX study conducted on September 26-27 showed that 47 percent of respondents endorsed the idea of Donald Trump's opponents and 42 percent condemned it.
However framed, be it legal or judicial, the Senate Republicans had an obligation to make a choice - a tough choice for some - to check Trump's abuses of power as president. Regardless of the political implications for their own re-elections, they had a constitutional duty to do what's right.
But they failed to do their jobs - and their votes to cover up Trump's lawlessness didn't just excuse interference in our elections, they serve as an endorsement for him to do it again. But as we grapple with the consequences, we must not fall into despair.
Trump did admit to asking a foreign country (Ukraine) to interfere in US elections - which was indeed a direct threat to democracy. And since the impeachment trial began, advocates have continued to impress upon Congress its constitutional duty to hold Trump accountable to the law.
Several features stand out in the impeachment quest against President Trump. There is constitutional discourse as mythology and fetish. There is an outrage that the executive office could have been used to actually investigate political opponents through foreign agents. There is cattiness over whether the conduct of the president veered into the territory of criminality, or fell somewhat short in his incessant obstruction.
The US President in rebuttal on the actions of his opponents said that this was the 'greatest scam in the history of American politics' and later even called democrats' impeachment inquiry a coup.
Analyzing the events unfolding in the US, Graham Dodds, Department of Political Science, Concordia University, reminded that a similar situation related to the beginning of the impeachment procedure occurs in US history for the fourth time.
There's just too much at stake right now to keep fighting to protect our democracy. That means fighting to protect US citizenry's access to the ballot box and for the right to have every vote count.
It means participating in the census, a critical tool that determines whether we are fairly represented in our voting districts and how much money is invested in our children's schools and in our families' health care, Diallo Brooks is Senior Director of Outreach and Public Engagement.
It means standing against Trump's narrow-minded, discriminatory judicial nominees whose decisions are rolling back our rights at every turn. It means fighting for our future and for our children's futures, says Brooks.
"Impeachment could help Trump, by energizing his core supporters and feeding into his claims that he is constantly treated unfairly and that everyone is out to get him. On the other hand, maybe this will give Republicans a way to finally stop blindly defending Trump and to distance themselves from him," Graham Dodds said. Trump the symptom remains, his voting base not necessarily convinced or persuaded.