Trump tax cuts will still 'pay for themselves' 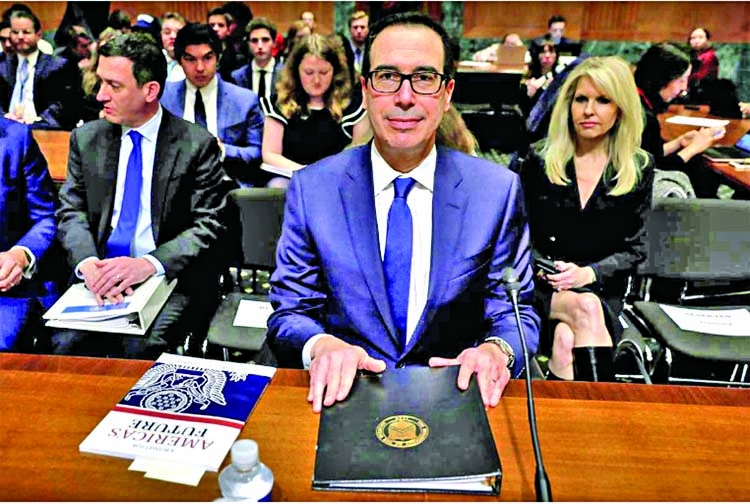 US Treasury Secretary Steven Mnuchin waits to testify before a Senate Finance Committee hearing on the President's FY2021 Budget on Capitol Hill in Washington. Reuters
US Treasury Secretary Steven Mnuchin insisted on Wednesday that President Donald Trump's tax cuts will still pay for themselves over 10 years, even as the administration forecasts near-term deficits close to $1 trillion. Mnuchin told the Senate Finance Committee that the administration was two years into that 10-year period, and higher spending was the source of the deficits, not lower revenues.
The Congressional Budget Office predicted in January that U.S. deficits would average $1.3 trillion a year over the next decade, far higher than envisioned in Trump's budget released on Monday. That level is viewed by some economists and policy makers as unsustainable"Our analysis has always been higher than CBO.
As I've said previously, we believe that the tax cuts will pay for themselves over a 10-year period of time, it's how we score them," Mnuchin said. "Let me just comment that spending is increasing as well, but the trillion and a half dollars of tax cuts we have made will pay for themselves," he said.
Trump's budget forecasts $4.6 trillion in deficit reduction over 10 years and assumes economic growth at an annual rate of roughly 3% for years to come. Trump officials say the figures were based on an assumption that Trump's policies would be enacted.
The administration's economic forecasts are far rosier than those of the CBO, many private economists and the International Monetary Fund, which predict fading stimulus from the tax cuts and constraints from an aging U.S. workforce.
CBO predicts the U.S. economy will grow 2.2% in the current fiscal year ending Sept. 30, with the growth rate falling below 2.0% in future years. He said government spending increased faster than Republicans would have liked because it included some spending that Democrats insisted on as part of the tax package, which he helped negotiate.
Asked why the administration did not adjust its forecasts downward due to the coronavirus that has severely slowed China's economy, Mnuchin said the impact was a "one time" event that would only affect growth in 2020, along with the production halt for Boeing's (BA.N) 737 MAX aircraft.
The coronavirus outbreak in China has shuttered factories, schools and public places across the world's second largest economy, causing parts shortages for automakers and other manufacturers around the world. Officials in China, reported a reduced number of new cases on Wednesday, but experts warned that the virus could still spread widely outside the country.
"I don't expect the coronavirus will have an impact beyond this year," Mnuchin said. But later, he said that Treasury was monitoring the coronavirus situation and that another three to four weeks of data was needed to fully assess its economic impact.
---Reuters, Washington