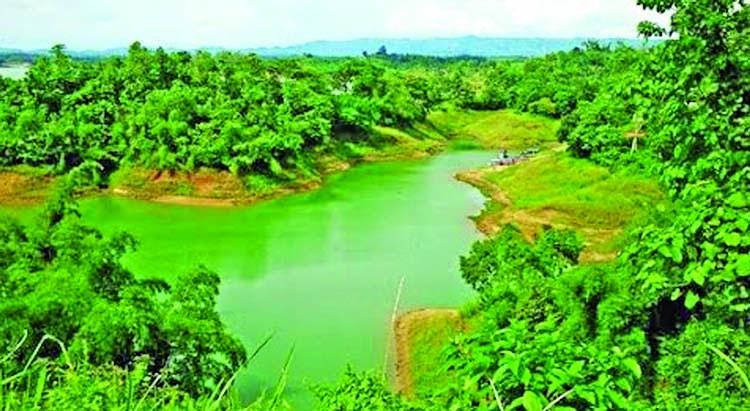 Kaptai Lake, the biggest manmade lake in Bangladesh, is heading for a tragic end as sediments fill up its bottom and waste materials continue to pollute it every day. The 688-square-kilometre lake, created by damming the Karnafuli River in Rangamati for hydroelectricity in 1960, has been providing livelihood for a large portion of the local population through tourism, fishing, transportation and much else.
Pollution and the use of pesticides are playing big roles in the water body's decline, environmentalists say. The lake, connecting six sub-districts, is traversed by thousands of people every day. Waste and oil from the launches and boats go into it, apart from those dumped by people living on its edges, locals say. It is unclear how much waste, including plastic and polythene, is dumped into the lake daily.
Deputy Commissi-oner of Rangamati AKM Mamunur Rashid says he is not sure if there had been any cleanup drives. 'Never been dredged' But siltation has turned out to be the major concern. The lake has never been dredged in 59 years, says Commodore Mahbub-ul Islam, chairman of Bangladesh Inland Water Transportation Authority (BIWTA).
Although the lake's average depth is nine metres, when the water level recedes, it becomes dotted with small shoals. Launches and steamers have to suspend operations until the water level rises. It is not just affecting the people dependent on the lake but also hampering power production.
The 230-megawatt capacity hydroelectric power plant's production has come down to 110MW, says ATM Abjjur Zaher, the project manager, noting that the situation will not improve until there's adequate rainfall.
It is an alarming situation that calls for urgent and effective measures, local say. They are pushing for dredging but the idea is opposed by some environmental activists. mMA Matin, general secretary of Bangladesh Poribesh Andolon, a movement to protect the environment, argues that dredging is not a permanent solution.
The water is more or less stagnant when a dam is constructed, he notes. "If we remove silt now, the basin will again be filled up in another 10 years," he says, recommending searching for alternatives. Deputy Commissioner Rashid admits that there are pitfalls but insists that it will be impossible to overcome the situation without removing the silt.
He says the lake is gradually becoming unusable because of siltation. "We've written to higher authorities but without any result. Recently, a BIWTA team has conducted a survey of Kaptai area," he says. People, pushing for dredging, are not realising that it will take time, Rashid says. "
You can't just dredge the lake. More research is needed before action, and issues like landslides should be considered," he tells UNB. Md Mahbubul Islam, Soil Resource Development Institute's acting chief scientific officer in Bandarban, concurs. "We can't deny the possibility of landslides since dredging will change the basin's structure," he says.