Polythene pollution is growing in ctg 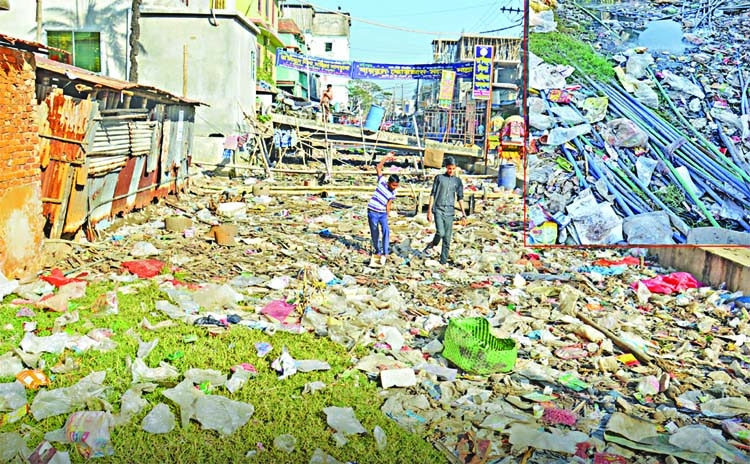 Polythene fills the bank of a canal at halishahar in Chattogram. -AA
Plastic pollution in Chattogram's environment continues unabated raising serious threats to human and animal health as the government is yet to move for reducing its production and safe management.
Environmentalists say that plastic can exist in soil and water for a long time as it is not biodegradable and it may turn into leachate and, through heat, get mixed with the food chain and enter human body causing diseases and, eventually, deaths. It also gradually gets divided into very small particles and get back to animal body through their food chain.
When burned, plastic releases dangerous chemicals such as hydrochloric acid, sulfur dioxide, dioxins, furans and heavy metals as well as particulates. Emission of such elements is known to cause respiratory ailments and stress the human immune system. And they are potentially carcinogenic, experts say. Micro plastic can also enter human and animal body through breathing.
plastic use was dangerous and became relatively more dangerous for Bangladesh as the government had no control over its production and had no safe management after its use. Waste Concern, an award-winning Bangladeshi social business concern that promotes waste recycling, at a study released in February 2019 found that a total of 821,250 tonnes of plastic waste were generated in urban hubs of Bangladesh a year while some 207,685 tonnes were dumped in marine environment annually.
It revealed that plastic wastes increased 17.52 times in 2014, compared to 1992.  Experts blame government indifference to addressing the alarming crisis even after having laws, policies and international contract ratification in favour of commitment to reducing the hazardous waste and a proper management of such waste.
The government at the World Environment Day in 2018 made a commitment to beating plastic pollution but is yet to take any pragmatic action in this regard.DoE director general AKM Rafique Ahammed told that the government banned polythene in 2002 but could not stop its use as the common people were yet to realise the danger from the material.
Bangladesh University of Engineering and Technology's chemical engineering professor Ijaz Hossain has mentioned that polythene is one of the nine derivative forms of plastic. 'We are thinking of using economic tools to control the use of plastic by imposing high tax on plastic and incentive for eco-friendly alternative products,' said Rafique.
Since 2015 the DoE has conducted 1,949 mobile courts, filed 4,462 cases, realised Tk 4.83 crore fines and jailed six people for different durations on charges of offences related to production, marketing, sale and use of polythene. NGO Environment and Social Development Organisation's founding member Shahriar Hossain said that the quantity of plastic waste in the country continued to sharply go up for its indiscriminate and unplanned use for packaging, particularly of polythene, and for lack of a policy on plastic goods production.
He pointed out that consumer goods producers recklessly use plastic in packaging, increasingly in mini packs and tubes, when they had alternatives. 'Single use plastic should immediately be stopped as it will not harm the economy or the users,' he said.Except polythene the government has no restriction on the production of other plastic derivatives in Bangladesh.
He, however, viewed that it was not time to ban all types of plastic as it became an unavoidable part of our daily life but he suggested reducing the use of plastic where there were alternatives and managing plastic waste where no alternatives were still available.
He has warned that use of recycled plastic in food packaging is highly dangerous as producers use some additive chemicals for easy manufacturing of plastic containers or packets in suitable shapes.'Recycled plastic used in food packaging may cause cancer,'
he further warned. Bangladesh Plastic Goods Manufacturers and Exporters Association general secretary KM Iqbal Hossain said that plastic was not a banned product and waste management was not manufacturer's responsibility.He said that over 5,000 plastic factories employed 12 lakh people of the country.
Bangabandhu Sheikh Mujib Medical University hepatology professor Mamun Al Mahtab has also said that if plastic enters human body in any form it might cause deadly diseases like cancer, critical lunch complications and food poisoning. Experts have called for ban on single-use plastic and on the use of plastic where alternatives are available and for phasing out other plastic uses gradually.They have mentioned that Bangladesh dumps plastic waste worth Tk several crore daily for the lack of recycling facilities.
Many countries in the world are reproducing plastic granules, fuel, refused derived fuel and road-construction material from plastic waste, he said.Some recycling facilities have, meanwhile, been developed in informal sector where several hundred people work in an unhealthy environment.60-year-old Fulmeher is one of them who has been collecting recyclable plastic from the Matuail landfill for the last 30 years.
She said that she earned Tk 6,000-7,000 monthly by selling garbage to local businessmen.'I fall sick frequently. If I work for two days I am forced to stay in bed for three day for sicknesses,' she said.Urban planners say that plastic dumped here and there contribute to waterlogging in Dhaka and Chattogram as plastic waste blockades drainage systems frequently.DoE officials have said that they found plastic waste even under 10 feet of the Buriganga river bed, which has reduced its navigability.
Plastic waste has also been found in most of the country's rivers, which has increased the flood risk, too.Epidemiologists blamed plastic for spreading dengue because of plastic waste not managed properly. Fire fighters said that huge quantities of plastic furniture and of plastic used in interior decoration in buildings have considerably increased the casualties and damage in fire incidents as it was an inflammable item.

Environmentalists noted that according to the Paris climate change agreement signed in 2016 the government agreed with other UN member countries to reduce the hazardous waste as the waste contributed to climate change.Experts said that in 2019 plastic in production, transportation and incineration would contribute greenhouse gases equivalent to 850 million tonnes of carbon dioxide to the atmosphere.

Stopping pollution is linked to achieving seven of the 17 SDG goals set by the United Nations.Some countries, including Indonesia, have set a target to reduce 30 per cent use of plastic by 2030 while the European Union and Canada have promised to stop single-use plastic by 2021.Starting on October 2, India is set to impose a nationwide ban on at least six types of single-use plastic including bags, cups, plates, small bottles and straws.
Huge quantities of plastic waste was seen at drains, canals, rivers, roads and even in crop fields around the country, mostly used for packaging different goods including food items, medicine and furniture.
Plastic products including tools, furniture, containers and other accessories are popular in Bangladesh like other third world countries for being cheap.A World Bank report published in September 2018 showed that around 234,000 people died in Banglasesh, including 80,000 in urban areas, due to environmental pollution and pollution-related health risks in 2015.