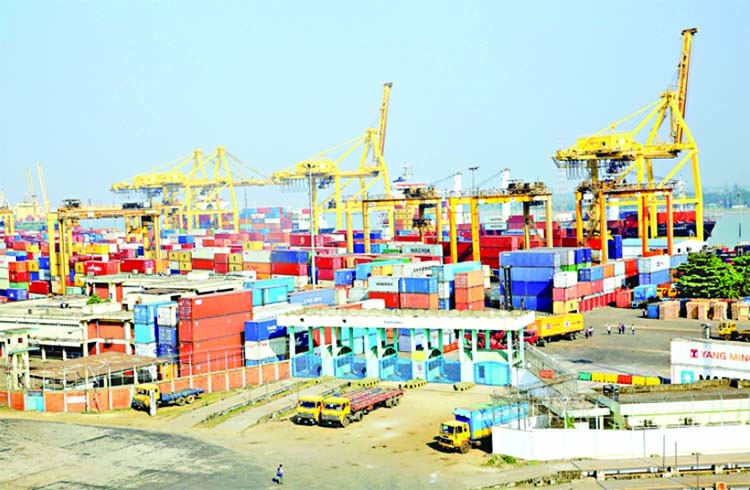 Container trade operations at Chattogram port. -AA
Exporters said that the container handling increased mainly due to the increase in the import and export volume in recent timesThe Chattogram port, the principal sea port of Bangladesh, is the busiest seaport on the coastline of the Bay of Bengal. After the liberation of Bangladesh, Chittagong port has constructed seven jetties and prior to independence, the country's prime seaport had 13 jetties.
Bangladesh has seaports, land ports, and airports that support Bangladeshi and other South Asian regional trade (such as for Nepal, Bhutan, and northeastern Indian states).
Shipments primarily transit via two seaports (Chattogram Port and Mongla Port), ten land ports (Benapole, Burimari, Akhaura, Sonamasjid, Hili, Banglabandha, Teknaf, Bhomra, Bibirbazar, and Nakugaon), and three international airports (Hazrat Shahjalal International Airport, Dhaka, Shah Amanat International Airport, Chattogram, and Osmani International Airport, Sylhet).
It Constructed in 1887 near the Karnafuli river channel and located approximately 16 kilometers upstream from the Bay of Bengal, the Chittagong Port (originally a river port) is the country's largest seaport. The CPA's mandate is derived from the Chittagong Port Authority Ordinance - 1976 (Ordinance No. LII of 1976), which was published on July 7, 1976 (amended 1995).
It is a member of the International Association of Ports and Harbors (IAPH) and oversees 15 departments. The Chattogram Port Authority has oversight over the Chattogram Port (CP), Inland Container Depot (ICD) Dhaka, River Inland Container Depot (RICD) Dhaka, and Sadarghat Jetty, Chattogram.
Chattogram Port has grown in the capacity of container handling and others over the years. The number of vessels berthing in port has increased, with 3,747 ships berthed in 2018 and 3,370 in 2017. The stay time of ships has also decreased.
Sources said off-dock container carrier ships now stay at the port for only 35 hours while export container carrier ships leave it within an hour only. Besides, the stay time of ships of imported containers was not more than seven days last year while it was eight to nine days in 2017.
Last year, the port handled the record 2.903 million TEUs (twenty feet equivalent units) of containers, a 13 per cent up from 2017's 2.667 million TEUs. Meanwhile, the port has moved six notches up to become 64th busiest among 100 top ports globally, according to the latest Lloyd's List, world's oldest journal on port and shipping. Chittagong port ranked 70th in 2018 and 71st in 2017 on the list.
It is to be noted that Chinese port of Shanghai with a throughput of 42.01 million TEUs clinched the top position in the 2019 chart. Chittagong Port Authority (CPA) chairman Rear Admiral Zulfikar Aziz said, "The management of the increased handling of containers is a big challenge now.""We've taken multiple plans, including short-term, mid-term and long-term ones, to make the port most modern to meet future challenges."
Mr Aziz said, "We're building a 1,500-metre multipurpose terminal and two container terminals with 1,225 and 800 metres in length respectively. Work on the terminals will be completed by 2025." "Container vessels are now getting berthing schedule within a day or two after their arrival at the outer anchorage of the port."
"The turnaround time for vessels in port was seven to eight days in 2017. But container handling has gained momentum for installation of key gantry cranes." Container vessels now have to spend less time at jetties, Mr Aziz mentioned.
"In 2017, 10 to 12 container vessels had to stay at the outer anchorage daily. In 2018, the number of ships has declined to two to three."The CPA chief said, "Chattogram port handled 2.667 million TEUs in 2017. The throughput soared to 2.903 million TEUs in 2018."
"It has achieved 9.0 per cent growth in container handling and 13 per cent in cargo handling. We've managed to cope with the ever-increasing growth in container handling for construction of yards." Currently, the maritime port has the capacity of accommodating 50,000 containers in its yards.
"As planned, the project has been finalised to build four terminals-Bay Terminal, Patenga Container Terminal, Laldia Multipurpose Terminal and Karnaphuli Container Terminal," Mr Aziz cited. "Now, a vessel with a length of 190 metres and draft of 9.5 metres can berth during high tide. Once Bay Terminal is built, vessels with more draft and length could berth at jetties."
He said, "We procured more than 60 equipment at Tk 1,000 crore in 2018, including six ship-to-shore gantry cranes, for container handling."Four more cranes will be added to the fleet this year. We procured rail-mounted gantry crane at Tk 22 crore for the first time in 2018.
Rubber tyre gantry cranes, forked lift and straddle carriers were also procured. Mr Aziz said, "The country's 92 per cent of export and import is done through Chattogram seaport. We've handled 98 per cent of our containers this year." Mongla port has handled only 2.0 per cent of containers during the period, he went on to say.