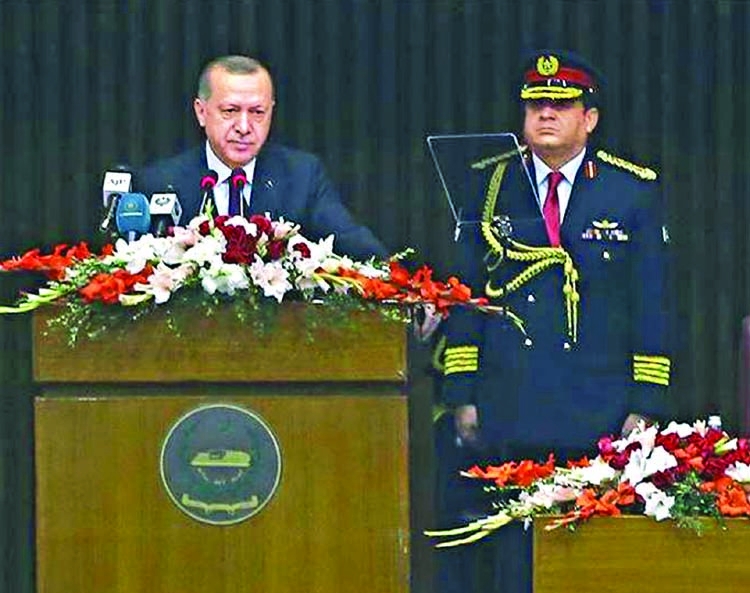 Turkey will continue supporting Pakistan's fight against terrorism, President Erdogan tells parliament in Islamabad on February 14, 2020.
Turkey's President Recep Tayyip Erdogan said on Monday that New Delhi's August 5 revocation of India-administered Kashmir's autonomy only made things worse for Kashmiris."The troubles our Kashmiri brothers have suffered for decades have been exacerbated by the latest unilateral steps,"
Erdogan said in his address to the joint session of Pakistan's Parliament during his official visit to the country.Erdogan said this "attitude that worsens the current situation and removes the freedoms and vested rights of Kashmiris is of no use to anyone".
It was Canakkale yesterday and it is Kashmir today, [there is] no difference," Erdogan said."We have never forgotten and will never forget the help, which the Pakistani people extended, by sharing their own bread during our War of Independence. And now, Kashmir is and will be the same for us."
The Kashmir problem, he said, can be solved -- not by conflict or oppression -- but on the basis of justice and fairness. "Such a solution would serve the interests of all parties. Turkey will continue to call for justice, peace and dialogue on the Kashmir issue."
He said the issue of Kashmir is as important to Turkey as it is to Pakistan.His remarks come around seven months into a lockdown on Jammu and Kashmir, the India-administered section of the disputed region, a move widely decried by human rights groups, as well as the global Islamic community.
In his fourth address to Pakistan's parliament, Erdogan also addressed the situation in Idlib, northwestern Syria, saying that Turkey's latest steps in the province's de-escalation zone are meant to prevent the Assad regime from killing 4 million oppressed people using barrel bombs.
Pakistan stands with Turkey's righteous cause, despite others who work to protect terrorists, he said, referring to Turkey's anti-terrorist Operation Peace Spring, launched last October, in northwestern Syria.
"Turkey will continue supporting Pakistan in its fight against terrorism," he added.Erdogan also said Turkey would support Pakistan against the application of political pressure by the intergovernmental Financial Action Task Force.
On the so-called Deal of the Century on Jerusalem, announced last month by US President Donald Trump and Israeli Prime Minister Benjamin Netanyahu at the White House to widespread condemnation, Erdogan blasted the plan as "an occupation project".Erdogan also said that Turkey will sign pacts on a range of industries covering trade, infrastructure and investments with Pakistan with the aim of enhancing bilateral ties.