An interview with Guillermo del Toro 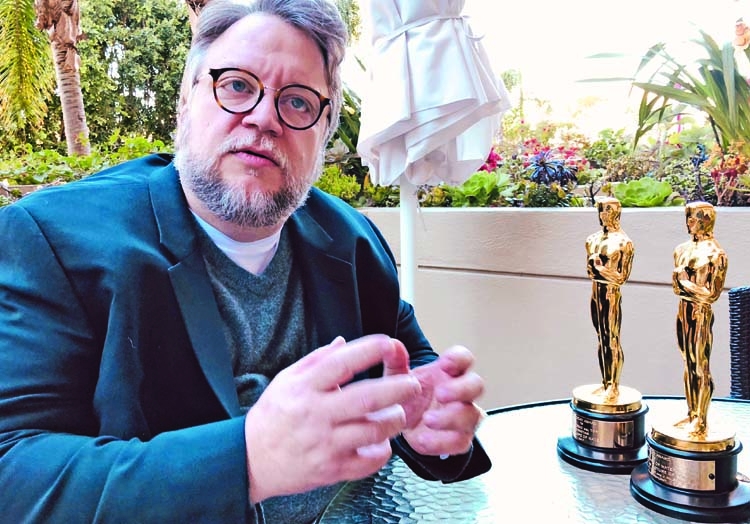 Joe Utichi: Tell me about the moment when your name-your film-gets read out on the Oscar stage.Guillermo del Toro Gomez: The strange thing is the only way to go through a season that basically started seven months ago in Venice is that you concentrate on the day and the task at hand, but inevitably you end up thinking about that moment every now and then.
You try to train yourself not to think much about it and concentrate on that you're doing. And then when the moment comes, the irony is then you go almost completely blank. It's like everything else blasts away, and you're in a bubble of silence, and you're in the moment.
Everything is very vivid, like you're aware of everybody's face, you're aware of your footsteps, and of how many steps you're taking. You see the dust on the set, you see everything. Everything becomes sort of hyper-real for a moment. Then you go up. The only time I prepared a little paper was at the Globes and I thought it got in the way for me. So since then, what I do is I speak from the moment I'm in.
All you see is a sea of faces. Famous faces, people you know, people you've worked with and people you want to work with. And what I saw yesterday was very beautiful because the energy in the room was so beautiful. It's impossible to transmit it if you were not there, you know? But it sort of came full circle with the feeling in Venice for me. So the moment was a moment that lasted many months, bookended by a very very similar emotion.

Joe Utichi: You describe it not dissimilarly to Julia Phillips-who won for The Sting-in her book You'll Never Eat Lunch In This Town Again. Though, to be fair, I'm pretty sure she was on Quaaludes or something at the time.
Guillermo del Toro: You become hyper aware, that's the main thing. It happened for me at Venice, it happened at the Globes, everything blends into one moment. At one point of the season, I said something that is really something that you're very conscious of, is that the distance between your seat and the stage is just a few steps, but they truly, truly take decades to cross.

Joe Utichi: We first met in 2006, the year you had Pan's Labyrinth, Alfonso Cuarón had Children of Men and Alejandro G. Iñárritu had Babel. They called you "The Three Amigos" even before that. Alfonso won Best Director in 2013 for Gravity, Alejandro did it himself in 2014 and 2015 for Birdman and The Revenant. Now you complete the hat-trick. Have you spoken to them yet?
Guillermo del Toro: Yes, Alejandro, we stayed together yesterday for about two, three hours. We talked and we were saying that when the three of us were at the Oscars, and Pan's won production design, cinematography and makeup, it took 10 years to complete that circuit you know? When Alfonso won first,
I remember Alejandro and I talking and saying, "Well, the law of probability goes down for us." And then Alejandro won twice and I was thinking, "Well the law probability goes down again." So last night felt really like a beautiful completion.

Joe Utichi: Did you grow up watching the Oscars? How long have you dreamed of taking that stage?Guillermo del Toro: What happened in Mexico normally when I was a kid, the movies would open almost a year later, so the Oscars were sort of coming attractions. Like, "This is what's coming next year, to a theater near you."
So we would watch the Oscars. We would stay late and we would watch what movies were coming up the pipeline. Many times, you were talking about a world with much less communication and there were movies you would hear about-The Exorcist,
The French Connection, The Godfather-but they would open much later, so you stayed up to see the promise of that. And then, in a strange way, they educate you to the fact that there is an industry, because when I was a kid in the '60s, I grew up thinking that movies were something that sort of happened and somebody was there to record them. It's a strange notion, but you almost felt,
OK this happened and somebody made a record of it. And then at the Oscars you started hearing names and positions and you realized in a very primal way, that there were people in charge of sound, music, makeup, you know?

Joe Utichi: So you realized filmmaking was something tangible, something possible?Guillermo del Toro: The first time I understood it was actually in a very prosaic way, was when I sent my first Super 8 reel. I sent it to the pharmacy, and the pharmacy would send it outside of my hometown. It went to Mexico City, it was developed there and then it came back. It took three weeks, and then you projected that reel, and all of a sudden you understood basically the magic of a lens and a camera.
But then as I started doing Super 8 reels alone, or with the help of my friends or my brothers, and I realized somebody needed to do this, somebody needed to do that. But the beginning was the Oscars.Joe Utichi: You've been on one hell of a ride with this movie.
Guillermo del Toro: Yeah, and the beauty of it is it started emotionally in a blaze [at Venice] and so it has come full circle to that. It was a ride. We went through everything-ups and downs. We showed this movie on the peak of a mountain, by the edge of the sea, on a gigantic island. We went everywhere.

Joe Utichi: Theoretically you're all in competition. But I wonder if it's like tennis players on tour. Their best friends are one another because they're the only people who know what it's like to be at the center of everything.
Guillermo del Toro: It really is the trenches. And I don't want to make it dramatic; I use analogy only because of the camaraderie, or the people that are in a line and they cannot move or leave their post. I'm not comparing filmmaking to war, but it is a situation in which you share a long time in a confined space, with a group of comrades.
The other day, I had one of the most memorable nights of my life, because we were at a restaurant and it was a beautiful dinner with all directors, among them Francis Ford Coppola, Jordan Peele, Paul Thomas Anderson, everybody nominated, Steven Spielberg, Michael Mann, Alejandro. And we spent five hours in the most collegiate, disarming, moving way.
Because directors talking to directors, we know what the job entails. It's a job which, its alchemy remains largely misunderstood, except by those that do it, even in this industry. You can be an executive or producer, you know, and really there is a very, very strong sense of kinship between directors because we know what it entails and we can talk about lenses, dollies, acting, emotion, dramatic arc.
Spielberg presided over it in a beautiful way, Francis presided, then also Michael Mann, it was like a really collegiate thing. We were able to ask, like, "This rumor about this movie, is it true?" We would talk in a disarming way, and talk the minutiae, down to the lens.
Like, Francis said, "Well The Godfather was largely shot on a 40mm and this is why, and this is what I was looking for." He talked about Brando in very moving, human ways,  that I've never really heard. He just said that for all the legend he was just such a good person. It was an incredible evening you know and that's a gift of this season.


Joe Utichi is a journalist specializing in film and
entertainment. He is a member of BAFTA.
The interview appeared in deadline.com