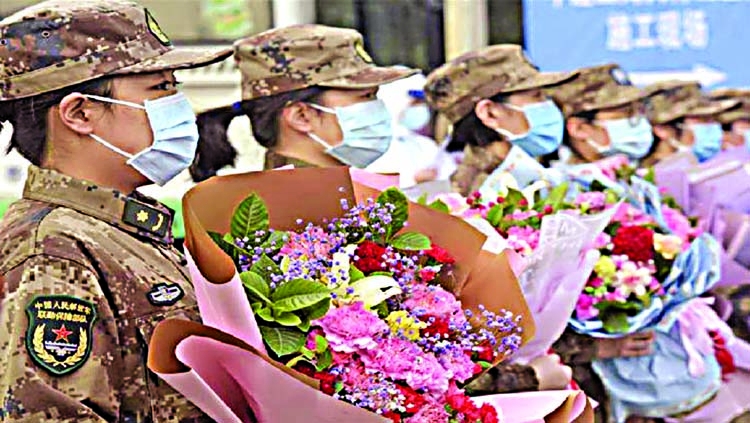 The ongoing fight against the novel coronavirus pneumonia (COVID-19) has united not only the Chinese people, but also many around the world to voice their support in various ways.
In Malaysia, a group of musicians, inspired by the Chinese people's iron will to win the battle against the COVID-19, have gathered to create a song in the hope of strengthening the spirit of those affected by the coronavirus.
The song -- named "You Are Not Alone" -- carries a message of hope and solidarity, seeking to encourage the Chinese people that they are not alone in their fight and the difficulties will ultimately be overcome. The song was made by Malaysian producer Ong Peng Chu in collaboration with Chinese songwriter Zhou Kaiyi, and performed by 10 Malaysian artists.
Ong said he felt the need to do something to show his support seeing the raging epidemic."We got to do something, especially from people outside of China. We want the people in China to be free from fear or worry. We are here, we are together," Ong told Xinhua on Thursday at an event to unveil the song.
Among the performers was Jeryl Lee Pei Ling, who said she had seen news on the COVID-19 and felt obliged to do something to show her support to those in the affected areas. "I believe this song will help them...We are here all together supporting them," she said.
Another singer, Masya Masyitah, expressed the hope that people in the central Chinese city of Wuhan and all those affected by the COVID-19 would remain calm and resolute in the face of difficulties."I hope you can be strong. Don't panic because we can overcome this, and I hope the situation will improve quickly," she said.
For his part, singer Gary Chee Shih Hau said: "I think, for a singer, what we can do is just deliver our thoughts. And we believe these songs can deliver some positive energy to those affected ... and hope everybody can be together and get through it."
A video of the song, released Tuesday on social media, has been viewed thousands of times and drawn outpourings of sympathy and support from the Malaysian public.
"Be strong, Wuhan! The whole world is behind you. Thank you for the beautiful song! All Heroes need compassion from people like warm Malaysians," wrote netizen Lily Tania.
"This is not a fight for China. It's a fight for everybody in the whole world. We must unite to fight this virus. Jiayou Wuhan, Jiayou China, Jaiyou everybody!" Foo Yit said.