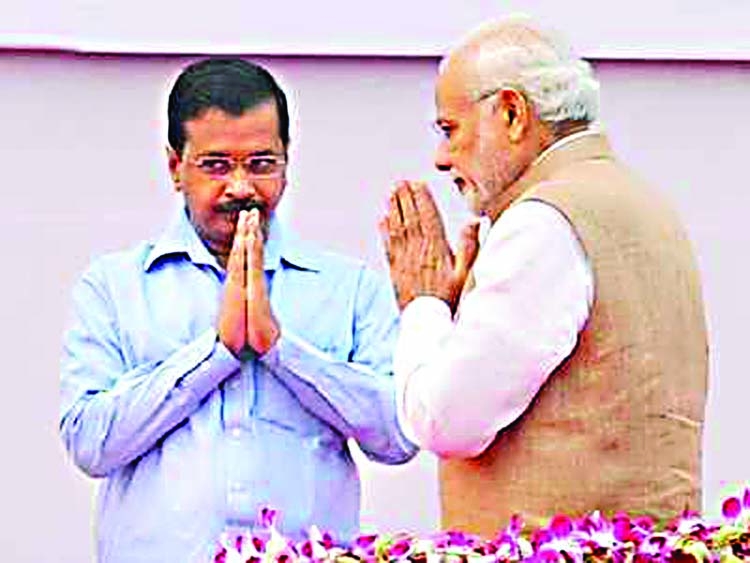 Aam Aadmi Party chief Arvind Kejriwal has invited Prime Minister Narendra Modi to his swearing-in ceremony on Sunday for his third term as Delhi's Chief Minister. Kejriwal's third oath ceremony after a landslide victory in Delhi will feature no chief minister or political leaders from other states, the AAP said on Thursday.
The 51-year-old will be sworn in at Ramlila Maidan in the heart of Delhi, three days after AAP's sweep in the Delhi election with 62 of 70 assembly seats."No chief minister or political leader from other states will be invited for the ceremony that is going to be specific to Delhi," AAP's Delhi unit convener Gopal Rai told the Press Trust of India.
Kejriwal will take oath with the people of Delhi who have reposed their faith in his leadership, said Rai.AAP has invited "everyone in Delhi" to the ceremony, Kejriwal's number two in the party, Manish Sisodia, had said yesterday.
On the day of his victory, Kejriwal had said in his first words: "Dilliwalon, gazab kar diya aap logon ne (Delhi, you have done wonders). I love you!"
The AAP chief is likely to start his third stint with his old team. Sources say no new ministers are likely to be added to the Delhi cabinet, amid speculation that new faces like Atishi and Raghav Chadha may be included this time.
On Tuesday, AAP scored his second massive victory in Delhi, limiting the BJP to a single-digit score of 8 seats, which, however, is an improvement on its 2015 tally of three. The Congress, which ruled Delhi for 15 years till 2013, won zero seats.
---Agencies