Biggest jump in world defence spending in a decade 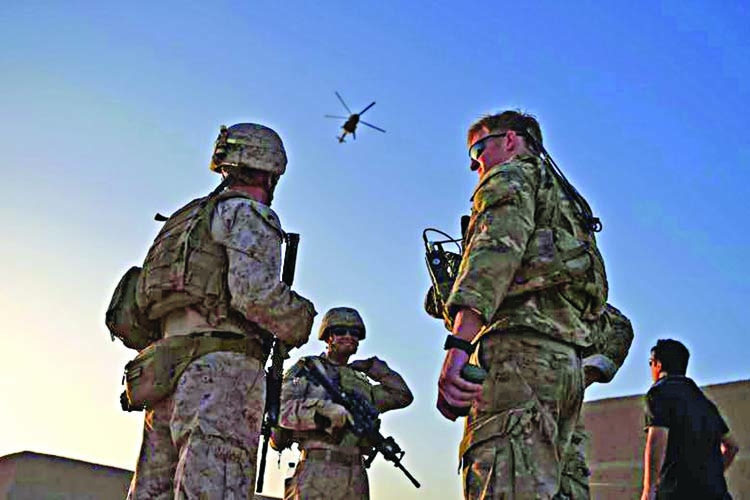 In a file photo taken on August 27, 2017, US Marines and Afghan Commandos stand together as a helicopter flies past during a combat training exercise in Lashkar Gah. -AFP
Global spending on defence rose by four percent in 2019, the largest growth in 10 years, led by big increases from the US and China, a study said Friday.
Beijing's military modernization program - which includes developing new hard-to-detect hypersonic missiles - is alarming Washington and helping drive US defence spending, the International Institute for Strategic Studies (IISS) said.
The IISS's annual "Military Balance" report said the increase alone in US spending from 2018 to 2019 - US$53.4 billion (S$74.15 billion) - was almost as big as Britain's entire defence budget. Both China and the US increased spending by 6.6 per cent, the report said, while Europe - driven by ongoing concerns about Russia - stepped up by 4.2 per cent.
But this growth only brought European defence spending back to levels seen in 2008, before the global financial crisis saw budgets slashed.European NATO members have been seeking to increase spending to placate President Donald Trump, who has repeatedly accused them of freeloading on the US. Trump has railed at European allies, particularly Germany, for not living up to a 2014 NATO pledge to spend two percent of GDP on defence.
The mercurial president's anger over spending has fuelled concern about his commitment to the transatlantic alliance, culminating in an explosive 2018 summit where he launched a blistering public attack on Germany in a televised meeting with Chancellor Angela Merkel.
---AFP