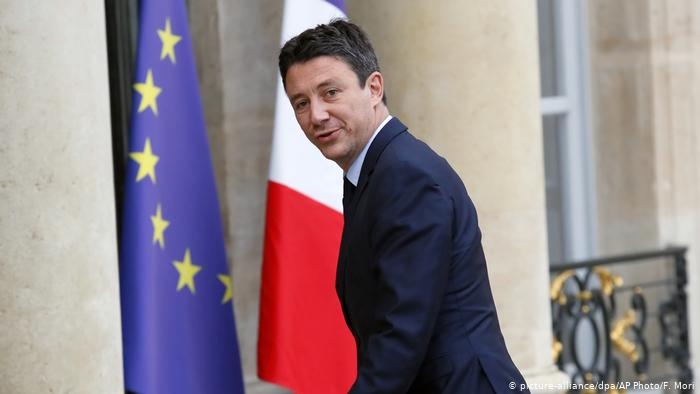 A sex video has ended French ruling party candidate Benjamin Griveaux's hopes of becoming mayor of Paris.
The ex-spokesman for President Emmanuel Macron's government, who was already trailing in the race, was apparently targeted by a Russian protest artist accusing him of hypocrisy.
"No-one should be subjected to such abuse," said Mr Griveaux, 42.
The video, showing a man in a compromising position, quickly spread on social media late on Thursday.
Petr Pavlensky, who sought asylum from Russia in 2017, said he had posted the video online.
How France reacted
Opponents from across the political spectrum voiced their outrage.
Incumbent Mayor Anne Hidalgo appealed for respect for people's private lives, while far-left leader Jean-Luc Mélenchon condemned the attack as "odious". Far-right leader Marine Le Pen suggested that for the sake of democracy Mr Griveaux should perhaps not have resigned.
Prime Minister Edouard Philippe expressed his support for his former colleague and Interior Minister Christophe Castaner went further, warning that publishing videos without the author's consent was an offence punishable by a significant fine and up to two years in jail.
The video appeared on a little known website that featured a profile of Mr Griveaux's political ambitions and his "fanatical faith in family values". It then alleged that Mr Griveaux had exchanged intimate mobile phone messages with a young woman and sent her a personal video.
A link to the site was shared by an MP who was forced to resign from Mr Macron's LREM (Republic on the Move) party in late 2018.
Mr Griveaux told the BFMTV news channel that for the past year he and his family had been subjected to "defamatory remarks, lies, rumours, anonymous attacks... and even death threats".
"This torrent of mud has affected me and above all hurt the people I love."
Mr Griveaux's lawyer said he would press charges over the publication of the video, which he said violated the right to a private life.
Who is Petr Pavlensky?
Mr Pavlensky, who says he posted the video online, first gained notoriety by nailing his scrotum to Moscow's Red Square in 2013. He fled Russia and sought asylum in France when he was accused by the authorities of a sexual assault that he denied.
He served seven months in jail for setting the front door of the FSB intelligence agency on fire in Moscow. He later caused minor damage to a Banque de France branch by setting that alight.
He told French news channel LCI that Mr Griveaux was only the first politician that he would target: he had only just begun, he claimed. Politicians had to be honest and he said he would carry on fighting the "propaganda and puritanism of politicians".
French media have traditionally avoided prying into the private lives of people in public life and a number of figures referred distastefully to the "Americanization" of politics. "I don't like people mixing up political life with people's privacy," said MP Alexis Corbière.
Lawyer Marie-Anne Soubré told a French talk show she was sick to her stomach that France had got to this point. "To what new low have we fallen in public life that anyone is prepared to publish this kind of thing to bring down politicians?"