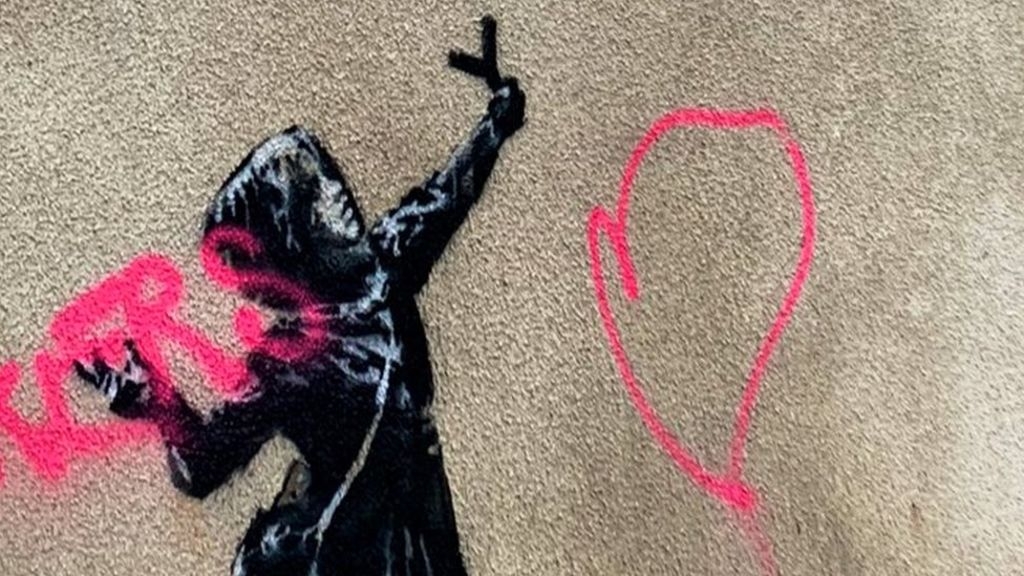 A mural by Banksy has been defaced just 48 hours after it appeared.
The piece, featuring a young girl firing red flowers from a catapult, appeared on the side of a house in Bristol on Thursday.
Banksy confirmed he was behind the piece by posting a picture of the work on his Instagram page at midnight on Valentine's Day.
But an offensive phrase has now been daubed over the street artist's design in bright pink lettering.
A Perspex panel placed over the artwork on Thursday to protect it has also been torn down, with the vandals directly defacing Banksy's design.
The British Somali Community Association, based in Barton Hill, tweeted that the vandalism was "shocking" and it was "sad seeing the devastation".
Kelly Woodruff, whose father owns the property in Marsh Lane, said flowers placed on a road sign as part of the artwork had also been stolen.
She said her family were "devastated" and were taking steps to protect the mural from further harm.
Temporary measures such as protective boxes and security fencing will be erected this weekend, before longer-term solutions are put in place.
Ms Woodruff said: "It is so sad. They have taken the joy away from everyone.
"We are very keen to stress that these temporary measures, which could cause some short-term frustration, are there to protect and preserve the art for the future.
"We want this to be available to everyone for years to come and for as many people as possible to come along to take a look and enjoy it."