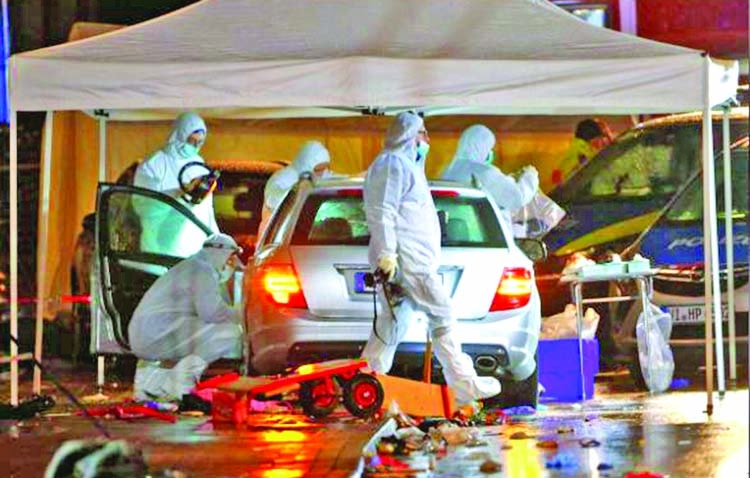 Police forensic officers work at the scene after a car ploughed into a carnival parade injuring several people in Volkmarsen, Germany on Monday. -Reuters
A German man plowed his car into a carnival parade in the western town of Volkmarsen on Monday, injuring 52 people including children, police said, adding it was too early to say what his motive was.
German prosecutors and police said the suspect, a 29-year-old German citizen, had been arrested on suspicion of attempted homicide. The motive remained unclear and investigators were looking into all possibilities, they added. "This is a terrible day, this is a terrible deed," said Peter Beuth, interior minister of Hesse, the western German state where Volkmarsen is located.
A third of those injured were children, he said, and police still had no indication of the possible motive."It can be assumed that it was intentional," police spokesman Henning Hinn said at the scene, where debris from the carnival littered the ground and a silver Mercedes-Benz car that appeared to have been involved was taped off by police. He said eight to 10 of around 30 people injured were seriously hurt. "Among those who are seriously injured are children, unfortunately," he added. Bild newspaper said some of the injuries were life-threatening.
German news website HNA cited witnesses saying the man appeared to have targeted children and had driven "at full throttle" into the crowd, which had gathered for a traditional procession ahead of the Christian season of Lent.

"People were coming towards me, crying," Bild newspaper quoted local county commissioner Reinhard Kubat as saying."There were mainly injured children in the street, but also older people. Children came up to me and said it sounded like 'Plop, plop, plop' whenever the car ran over a person."
Police called off all carnival parades in Hesse as a precautionary measure, but said they were not aware of any danger elsewhere in Germany.  "We have no specific indications of an ongoing threat," police said.German Chancellor Angela Merkel said her thoughts were with the injured and their relatives and thanked police and medics.
The incident comes less than a week after a man shot dead nine people before killing his mother and himself, in one of the worst racist attacks in Germany since World War Two.Carnivals are hugely popular in parts of western Germany, especially in Rhineland cities such as Cologne and Duesseldorf, where festivities peak on "Rose Monday" with tens of thousands attending street parades featuring comical or satirical floats.
Police cars and ambulances rushed to the scene in Volkmarsen, a small town 260 miles (420 km) west of Berlin.
German media said the driver deliberately broke through plastic barriers set up by police around the parade area, where 1,500 people were expected to gather.The car continued driving through the crowd for about 30 meters (33 yards) before coming to a halt, a witness told local broadcaster Hessenschau.
Spokesmen for the police and state prosecutors declined to comment on local media reports that police had arrested a second person in connection with the incident.In 2016, a Tunisian man with Islamist militant ties plowed a truck into a Christmas market in Berlin, killing 12 people. He was later shot dead by Italian police after he fled Germany.
---Reuters, Volkmarsen