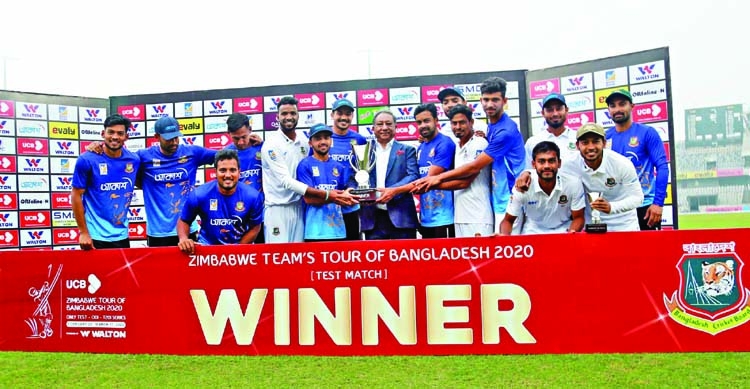 Bangladesh Test cricket team celebrating with trophy after beating Zimbabwe in the only Test on day four at the Sher-e-Bangla National Stadium in Mirpur on Tuesday. -BCB
A new-look Bangladesh side stopped the rot at the Sher-e-Bangla National Stadium in Mirpur, snapping a six-Test losing streak with an emphatic victory by an innings and 106 runs on day four of the only Test.
It was their first Test victory in 15 months as they tasted last Test win against West Indies in November 2018.
Needing to bat out almost two days to force a draw, the visitors collapsed quickly on Tuesday and were bowled out just one hour after the lunch break. Zimbabwe were bowled out for 189 in their second innings after resuming the day on 9-2 as Bangladesh's spin attack was too hot to handle despite a flat Mirpur pitch.
Off-spinner Nayeem Hasan (4-82) triggered Zimbabwe's second innings destruction, while left arm spinner Taijul Islam claimed 4-78 for Tigers. "Obviously, we needed to win this match and I'm very happy the way we played," Mominul, who scored 132, said at the presentation ceremony.
"I try to score and help the team post big total." Mushfiqur Rahim was adjudged man-of-the-match for his unbeaten 203 but off-spinner Nayeem, who finished with a match haul of nine wickets, also impressed everyone.
Bangladesh needed to capture just eight more wickets to win on Tuesday after Kevin Kasuza and experienced Brendun Taylor started the day. But the visitors lost three wickets in the morning session to hurtle towards a comprehensive defeat.
Kevin Kasuza and Taylor kept Pakistan at bay for only five overs before Taijul brought the first glory of the day for Tigers by dismissing Kasuza. The batsman nicked a Taijul delivery to Mithun at second slip.
Zimbabwe were always on the back foot on a turning pitch as only skipper Ervine showed some resistance during his 49-ball fight, scoring 43 with six boundaries and a six.
It was Nayeem who gave Bangladesh the prized wicket of Taylor, smartly caught by Taijul at mid-wicket, to end 29-run stand. The two experienced Ervine and Sikandar Raza added 60 runs before lunch but once the dam wall broke the scale tipped in Tigers' favour. Ervin batted with attacking mood before he was needlessly runout with a terrible mix-up, effectively ending ZImbabwe's hopes.
Taijul dealt two major blows when he removed the in-form Sikandar and wicket-keeper Chakabva in the post lunch session. Sikandar (37) hastened the downfall of the team by playing a rash shot, lured by Taijul who gave more flight to invite him to attack.
Down the order, Timycen Maruma threw his bat at everything to score 41 but that was more in desperation than with any real hope of altering the course of the match. He just delayed the inevitable for a while. Most of the Zimbabwe batsmen threw away their wickets with impatient strokes.
Chakabva too lost his composure charged Taijul and was excellently caught by Tamim at mid on. The departure of Chakabva signalled their collapse with the visitors losing their remaining three wickets off 24 runs. The last three wickets followed quickly thereafter as the tail was swept away by Nayeem and Taijul.
Taijul had last man Tshuma to spark celebrations in the field as Bangladesh players embraced each other.