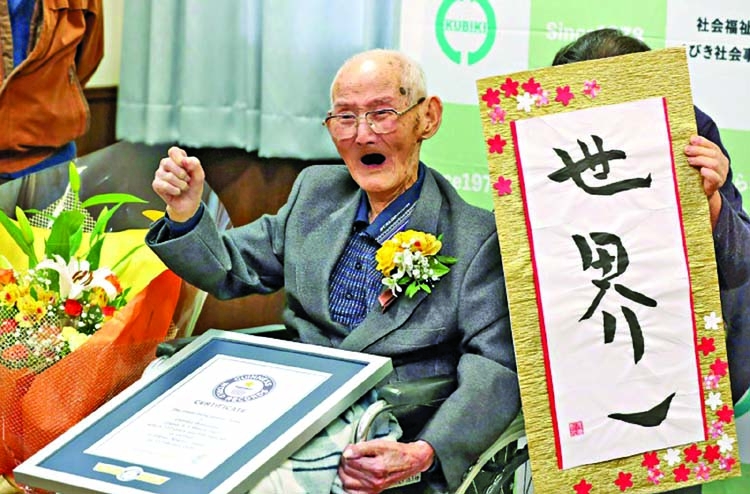 Chitetsu Watanabe after being recognized as the world's oldest living male. He has died away aged 112. -AFP
A Japanese man recently named the world's oldest living male has died aged 112, a local official said Tuesday.Chitetsu Watanabe, who was born on March 5, 1907 in Niigata, north of Tokyo, died on Sunday at his nursing home in the same prefecture, the official said. The news came less than two weeks after he was officially recognized by Guinness World Records.
Watanabe, who had five children, said the secret to longevity was to "not get angry and keep a smile on your face". He admitted a penchant for sweets such as custard pudding and ice cream. The oldest man in Japan is now Issaku Tomoe, who is 110 years old, according to Jiji Press, although it was not clear if Tomoe holds the title globally. The oldest living person is also Japanese, Kane Tanaka, a 117-year-old woman.
Japan has one of the world's highest life expectancies and has been home to several people recognised as among the oldest humans to have ever lived. They include Jiroemon Kimura, the longest-living man on record, who died soon after his 116th birthday in June 2013. The oldest verified person Jeanne Louise Calment of France died in 1997 at the age of 122, according to Guinness.
---AFP, Tokyo