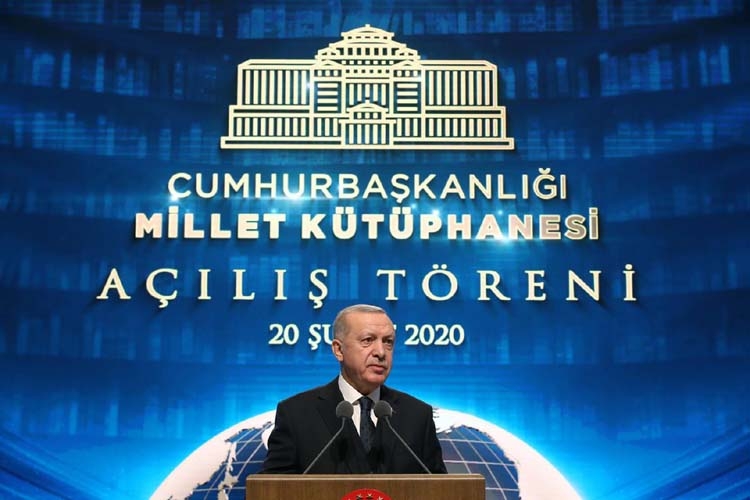 President Tayyip Erdogan addresses the audience during a ceremony at the Presidential Palace in Ankara, Turkey, February 20, 2020. -Reuters
Syrian rebels backed by the Turkish military have seized the town of Nairab in northwest Syria's Idlib, Turkish and rebel officials said on Tuesday, the first area to be taken back from Syrian government forces advancing in the province.
Syrian President Bashar al-Assad's forces, supported by Russian air power, are trying to retake the last large rebel-held region in Syria after nine years of war. Nearly a million Syrians have been displaced by the latest fighting.

Turkey has responded by sending thousands of troops and equipment into the region to support the rebels in resisting the offensive."With the help of our Turkish friends, we have regained control of the strategic town of Nairab, the gateway of Saraqeb, after expelling the terrorist Russian militias," Yusef Hamoud, spokesman for the Turkey-backed National Army, told Reuters.
A Turkish security official said that the Turkish military had supported the rebel offensive with shelling and that bomb disposal teams and the rebels were now clearing the town.Their next goal was to capture the strategic town of Saraqeb, where Syria's main north-south highway linking Damascus and Aleppo meets the road west to the Mediterranean.
"This will happen soon. The regime suffered heavy losses in the clashes last night. Also, a serious amount of weapons and ammunition was seized," the Turkish official told Reuters.He said there had been no clash between Turkish and Russian forces in Monday's advance on Nairab and that no Turkish soldiers had lost their lives in the clashes.
Two weeks ago, the Turkish Defence Ministry said Syrian government forces briefly abandoned Nairab as the Turkey-backed rebels advanced on the town. However, the rebels were subsequently pushed back from the area.Since Turkey poured its forces into northwest Syria to halt the Syrian government forces' campaign, 17 members of the Turkish forces have been killed.
The fighting has strained ties between Turkey and Russia, which although backing opposing sides in Syria's conflict had worked to contain the violence until the latest flare-up. Turkish President Tayyip Erdogan said there was not yet full agreement on holding a proposed March 5 summit with Russia, France and Germany on the Idlib conflict, but he may meet Russia's Vladimir Putin on that date.
At a news conference in Ankara before leaving on a trip to Azerbaijan, Erdogan said that a Russian delegation was set to come to Turkey on Wednesday to discuss the situation.
"There is no full agreement yet between (French President Emmanuel) Macron...(German Chancellor Angela) Merkel, and Putin," he said. Macron and Merkel have both urged Putin to end the conflict, concerned about the humanitarian situation.
On Saturday, Erdogan said that Turkey had set out a "road map" for Syria after calls with the three leaders, while the Kremlin has said it was discussing the possibility of holding a four-way summit.
Turkey already hosts 3.7 million Syrian refugees and says it cannot handle another wave. It has closed its borders.Syrian government forces are advancing closer to the camps for displaced persons near the Turkish border, where the migrants fear being caught up in the fighting.
The Syrian Observatory, a war monitor, said on Monday that pro-Damascus forces had seized control of 10 more towns in southern areas of Idlib province in less than 24 hours.