The nightingale will sing on 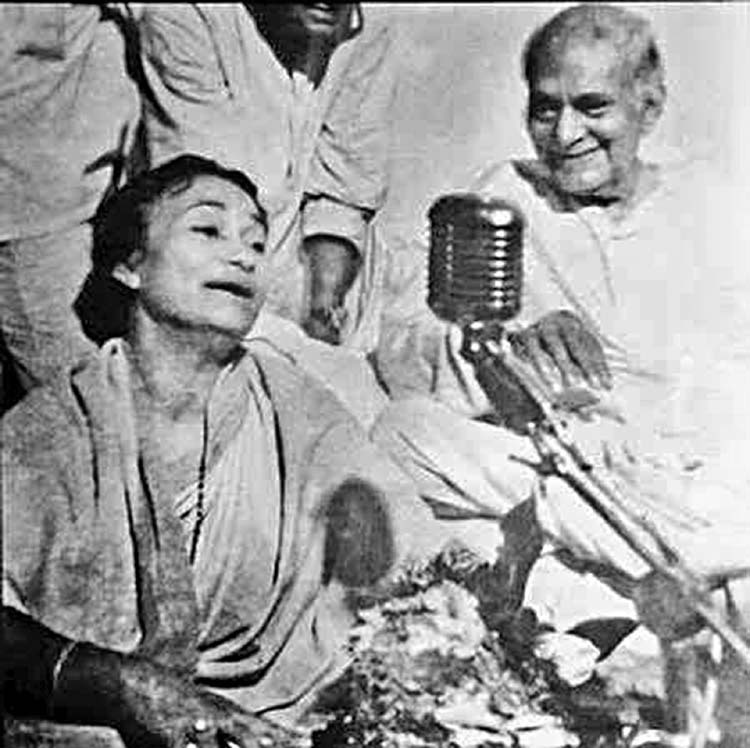 There was the ethereal about Feroza Begum. The gods, in the infinity of Creation, must have decided that in her being would reside a nightingale. Her renditions of Nazrul Geeti came effortlessly, in the way that the breeze blows softly through the woods and across mountains.
In May 1972, here in the capital of a new nation, Kazi Nazrul Islam --- long deprived of speech and bereft of intellectual creativity --- listened spellbound as Feroza sang his songs to him. His eyes said it all. She looked into those eyes and sang on. The world listened.
In Feroza Begum was a world of melody. In her rendition of Nazrul songs came a flavour that no one, either in Bangladesh or in West Bengal, has been able to match. The richness of Nazrul music, to the accompaniment of Feroza's voice, achieved a distinctiveness all its own. You could suggest, and no one would disagree, that Nazrul and Feroza were made for each other. Or broaden the thought.
Feroza Begum and music were made for each other. Into the warmth of her life came Kamal Dasgupta, that famous name whose compositions are yet remembered as being some of the finest in the Indian subcontinent. And then came, into the family, a new generation of music makers. Her three sons proved the truism that music could be a generational, indeed a dynastic affair.
Go back to Feroza Begum. In 'mora aar jonome', she makes the music rise to a crescendo. And it must rise because her voice reaches out to the skies, to have you know that love between man and woman is fundamentally a sublime affair. She was no more than twelve when the world became her stage.
She burst forth with her first album. And on it were such Islamic songs as 'morur buuke jibon dhara' and 'Nabiji esho go'. She was always grateful to Chitta Roy for the musical compositions of the songs.
That gratitude comes through in the perfection she gave such defining songs as 'tumi shunite cheyo na amar moner kotha'. Imagine a forlorn lover-woman, in plaintive mood, on the banks of a bucolic stream, missing the lover she will not, must not forget.
It was such a woman who came alive in Feroza Begum. But, then again, Feroza's exquisite artistry adroitly transformed this heartbreak into the luminosity of spring when she sang 'tumi shundor tai cheye thaki priyo'. In the beauty of Nazrul songs she spotted the beauty of the poet Nazrul.
As she would relate the story, her meeting with Nazrul was a matter of destiny. They met at a radio station. The poet wondered why she had elected to sing songs that quite did not go with her tender age. Her love for songs, she replied, defied her age.
That was the principle she held dear all her life. She went out to the wider world --- to America, to Europe, to the rest of the subcontinent --- and made a gift of Nazrul to men and women who sought the meaning of existence in poetry and song. There was no stopping her, as there is no stopping the river from flowing. She was a mystic, in that special sense of the meaning, enriching lives with melody.
Her rendition of 'Laily tomar eshechhe phiriya' has for ages kept the heart throbbing in beautifully searing pain. And in 'chumki chumki dheer bhiru paaye polli balika bon pothe jaaye', the image is of an adolescent girl blossoming warily yet excitedly into womanhood. Feroza Begum sings and, as it were, dances through the song. It is all before you --- the girl-woman, the fallen leaves, the liberating woods. Only Feroza Begum could cause such magic.
The nightingale will not sing any more. But must we complain? Feroza Begum's songs have always played in our homes, in our courtyards --- like butterflies caught in the ecstasy of being part of the universe. The nightingale's songs will be heard on the banks of the moon-bathed river.
(Feroza Begum was born on 28 July 1930 and passed away on 9 September 2014)


The writer is Editor-in-Charge,The Asian Age.